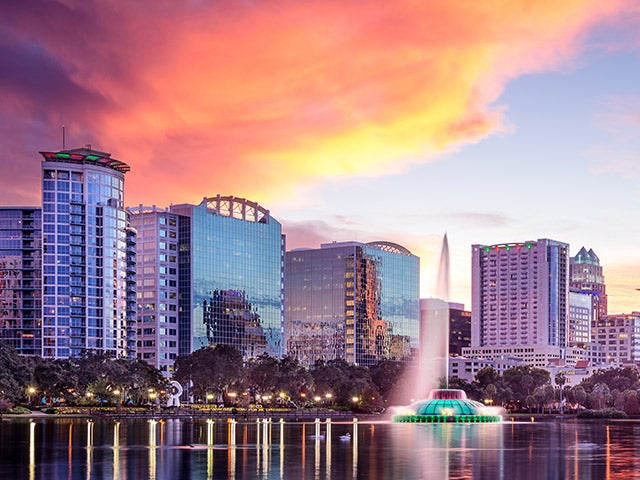 With a flight and hotel in Orlando, you can look forward to family fun. Orlando's best known for its theme parks, with Walt Disney World and Universal Orlando attracting millions of visitors each year. Founded in 1885, the city sprawls over 114 square miles of central Florida, with dozens of lakes and watercourses giving a lush, tropical feel. The city is simply packed with visitor attractions – you'll be hard pressed to fit everything into just one weekend in Orlando break. Central Florida also offers great shopping, nightlife and unspoilt wilderness areas just a short drive from the bright lights of International Drive. Choosing a flight and hotel deal in Orlando allows your family to enjoy America's biggest and best entertainment destination. Fun and sunshine guaranteed.

If you've opted for a flight and hotel package in Orlando, you'll likely be arriving at one of the city's two airports, Orlando International (MCO) or Orlando Sanford (SFB). Different airlines use different hubs for their flights to Orlando, the only difference being that Orlando International is closer to the city centre. Before you board your flight from Manchester to Orlando you'll need to have an ESTA visa, which you can apply for online. Without one, you won't be allowed to travel. Immigration can also be busy if there are several flights from London to Orlando or other destinations arriving at the same time. Many weekend Orlando visitors fly-drive, and car hire is well signposted from the arrivals hall. From Orlando International, it takes just 15 minutes to drive to International Drive, where many visitors on package holidays in Orlando choose to stay. Orlando Sanford is further north of the city, and the journey to your hotel will likely take around 45 minutes.

Is there a best time of year to visit Orlando?

Florida is the Sunshine State, with an average of 233 sunny days per year in Orlando. The best time of year for a city break in Orlando is late spring or autumn, when crowds at the theme parks are smaller temperatures are mild. Rain, when it comes, tends to pass quickly in spectacular thunderstorms. Winter, especially at Christmas and New Year's Eve, is also a popular time to escape the British cold for a city break in Orlando, with average temperatures of around 17°C in December. August and September fall in hurricane season, which can bring wet and windy weather.

Package holidays in Orlando are usually based around one of the two major theme park brands – Disney and Universal. Walt Disney World features four main parks: Magic Kingdom, Epcot, Animal Kingdom and Hollywood Studios. In addition, Disney operates two water parks, Blizzard Beach and Typhoon Lagoon. Universal Studios has two main theme parks and one water park. If that's not enough theme park fun, you'll also find SeaWorld and Discovery Cove close by. It pays to be selective on your city breaks – Orlando has a lot to do, with every park offering something a little bit different – choose whatever suits your family best. While all theme parks are open year round including Christmas Day, water parks usually shut for around three weeks for maintenance over the winter.

What is there to visit in Orlando other than theme parks?

Get a taste of real Florida by booking a tour on an iconic airboat. Contact one of the several companies offering tours in the Orlando area, and head south for an hour from Downtown Orlando to unspoilt lakes, forests and countryside. Try to book a trip early in the morning, when the wildlife is most active. You can expect to see plenty of flora and fauna, including alligators, eagles and deer. There isn't anything more American than sports, and tickets are readily available for Orlando Magic basketball and Orlando City football games. An hour away on the coast sits the must-see NASA Kennedy Space Center, where visitors can tour the massive facility, learn all about the history of space exploration and see a real space shuttle. Close to Kennedy is Cocoa Beach, a laidback and family-friendly beach resort with miles of pristine sand.

Eating out in Orlando

There is no shortage of places to eat at in Orlando, with chain restaurants, all-you-can-eat buffets and steakhouses in abundance. If you want to dine with Disney characters, make sure to book in advance. Don't forget to pick up coupon booklets in supermarket foyers, as they contain discounts for some of the most popular places. One thing's for certain – city breaks Orlando won't leave you hungry. Portion sizes are huge and many restaurants are open around the clock, with drive-thru and takeaway options available for those who can't bear to be away from the parks.

What to bring home from Orlando

Outlet malls are almost as popular as theme parks among visitors to Florida, with big American and international clothing brands being sold at a fraction of UK prices. The two main outlet malls at Lake Buena Vista and Vineland both have a Disney outlets offering merchandise at substantial discounts to park prices – pick up T-shirts, mugs and other souvenirs. Large retailers such as Walmart also have great ranges of Disney- and Universal-themed products at competitive prices, so pick up your mouse ears along with your bread and milk. Whereas most malls and outlets are open seven days, some may have reduced hours on Sundays. When it comes to theme park shopping, the Harry Potter–themed shops at Universal are definitely worth a visit, with quirky store decor, uniformed staff and some unusual and magical products.