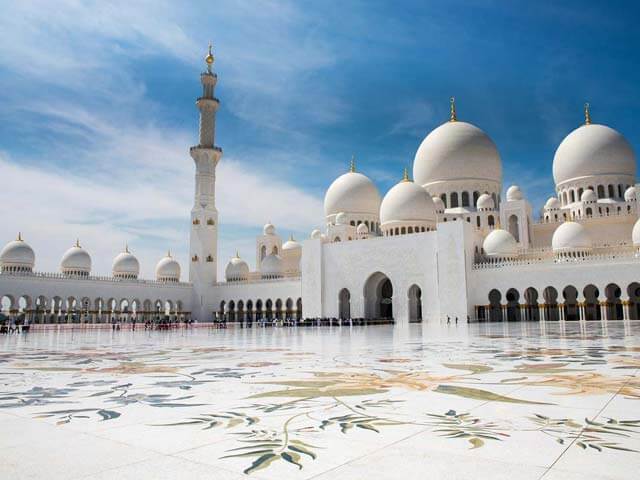 An overview of Abu Dhabi

The capital city of the United Arab Emirates, the T-shaped island of Abu Dhabi is the largest of the seven emirates. Home to a population of 1.5 million, the city is perfect for engaging with Gulf culture and tradition. Ancient souks, deserts and dervishes compete for attention alongside glass-walled structures. Consider a flight to and hotel in Abu Dhabi for your next vacation.

What to know before visiting Abu Dhabi?

The city is served by Abu Dhabi International Airport (AUH), which offers flights to over 120 destinations in more than 60 countries. A direct flight from London or Manchester to Abu Dhabi is easy. The local currency is the Emirati dirham (AED). Abu Dhabi is just four hours ahead of the United Kingdom.

Whereas Arabic is the official language, English is widely spoken – the UAE was a British colony until 1971. Urdu, Hindi, Farsi and Malayalam are commonly spoken as well, owing to the presence of Asian and Middle Eastern migrants.

When is the best time to visit Abu Dhabi?

Abu Dhabi has a hot desert climate with bright blue skies almost all year. The best time to visit is in spring (April and May) or fall (September and October), when the weather is pleasant. For cool weather, visiting between December and March is your best bet. Winter is the peak season, when conventioneers and overseas vacationers arrive in hordes – Abu Dhabi flights and hotels should be booked in advance for this time. With sweltering summertime temperatures, hotel room rates are often slashed in half, and package holidays in Abu Dhabi at this time are much cheaper.

What to do in Abu Dhabi

Places to visit in Abu Dhabi

City breaks to Abu Dhabi aren't complete without a visit to the 82-domed Sheikh Zayed Grand Mosque, which looms over the city's skyline. It's here that you can see world's largest handwoven rug, and gaze up at a gargantuan chandelier. Arabic culture unravels at the Heritage Village, located across atmospheric Dhow Harbour. The representation of an original fishing village with Bedouin tents and rustic wooden huts evokes the days of yore.

Ferrari World Abu Dhabi, a top-rated amusement park, is a must for fun city breaks in Abu Dhabi. Ride Formula Rossa (the world's fastest roller-coaster), which accelerates from zero to 240km per hour in 4.9 seconds flat! Built on a private beach, the Emirates Palace is the city's undisputed cultural hub. Don't miss the sprawling domed gatehouses, towering domes and 1,002 crystal chandeliers. While here, enjoy an opera during concert season, or an afternoon high tea in the foyer. Most of the city's clubbing and socialising takes place inside the confines of hotels. However, come Friday, many locals join the beach fun at the Al Maya Island Pool Party. Drink, dance, suntan or play volleyball to your heart's content on weekends in Abu Dhabi.

What to eat in Abu Dhabi

Whether it's vegetarian Indian cuisine you're after or fast food at a major chain restaurant, the city delivers. Don't miss out on local Emirati cuisine, best savoured at a heritage desert camp, onboard a sailing dhow or at a friendly street-side café. Favourites include slow-cooked al harees, a traditional meat dish, and al majboos, another meat dish cooked with lime and spices.

Pork and alcohol are served at larger hotels. Foodies and photographers will enjoy the Al Mina Fruit & Vegetable Souk and the Mina Fish Souk. Some of Abu Dhabi's best shawarma (grilled meat) can be had at Bait El Khetyar, a Jordanian restaurant. Its hummus and garlic labneh will have you craving more.

What souvenirs can you find in Abu Dhabi?

For all things gold and precious, head to the Madinat Zayed Gold Centre. Take home souvenirs of the city, where futuristic design meets desert tradition. Your flight to Abu Dhabi awaits!