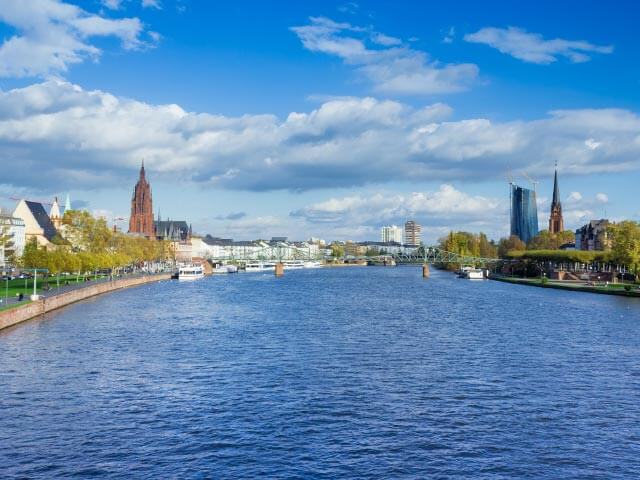 An Introduction to Frankfurt

Frankfurt is one of Germany’s most dynamic and historic cities, and a Frankfurt flight and hotel package offers a great opportunity to explore. Officially an independent city-state, the Free City of Frankfurt, for over 500 years until the second half of the 19th century, today Frankfurt is one of Germany's most international destinations and a major financial centre. However, package holidays to Frankfurt offer far more than that, particular for foodies, art lovers, and sports fans. And it's all only a couple hours away, on a flight from London or from Manchester.

What to Know Before Visiting Frankfurt

The gleaming Frankfurt International airport is the city’s major airport and is only 12km from the city centre. You can also fly into Frankfurt Hahn airport, 70km from Frankfurt. The shuttle bus takes around two hours. Germany's currency is the Euro. It's advisable to stock up on a few Euros when preparing your trip. There are two Frankfurts in Germany. Frankfurt am Main is the larger, more famous one we're discussing here! Frankfurt an der Oder is the other one. Take care not to mix them up!

When Is a Good TIme to Visit Frankfurt?

City breaks to Frankfurt are a good idea all year round, but it must be said that the town really comes to life in summer, when the banks and waterways of the mighty River Main are alive with boats, water sports, pop-up bars, and food stalls.

A weekend in Frankfurt is also recommended over the Christmas period, when the city’s storybook cobbled main square is transformed into a wonderland by a traditional German Christmas market. Warm up on hot spiced wine and bratwurst while you take in the glittering lights, craft stalls, and festive atmosphere.

What Must One Visit in Frankfurt?

What Is There to Do in Frankfurt?

Particularly delightful for families is the Ebbelwei Express, a charming red tram that runs all day long on a loop around the city and chugs past a host of Frankfurt’s most interesting landmarks. Hop on at any station on the route and take a scenic tour of Frankfurt while enjoying the pretzels, apple juice, or Apfelwein (alcoholic cider) that are served on board.

Frankfurt is fiercely proud of its football team, Eintracht Frankfurt. Die Adler (the Eagles) have a rich tradition and play in a 1925 stadium slightly out of town, near a bucolic wood. Even if you aren’t a football fan, the atmosphere and woodland surroundings make for a fun day out. For culture lovers, simply head to the Museum Embankment on the south side of the River Main. Here'll you find a beautiful stretch of many of the city's most important museums, one right after the other.

What Must One Eat In Frankfurt?

Germany has no national cuisine as such, but rather a variety of cooking styles spread across its various regions. No exception, Frankfurt as a few specialities that are particular to the area. Perhaps the most peculiar is Handkäse mit Musik (which translates to hand cheese with music). Served with onions and bread, this dish usually has one asking when the music comes in. Well, that usually comes later, in the form of the mild flatulence the dish often produces!

Apfelwein is another local speciality. Tart and high in alcohol content, it is not for everyone, but if you want to feel like a local, you should at least give it a try. For apfelwein and traditional dishes, should your weekend in Frankfurt include either a Thursday or Saturday, head to the local market Konstablerwache u-bahn stop, and you can easily try it all.

Bring a Bit of Frankfurt Home

City breaks in Frankfurt are best remembered by a visit to the Dippemarkt. Located just off the old town square, this Frankfurt institution is packed to the rafters with beer steins, apfelwein jugs, and all kinds of souvenirs perfect to commemorate your Frankfurt package holidays.