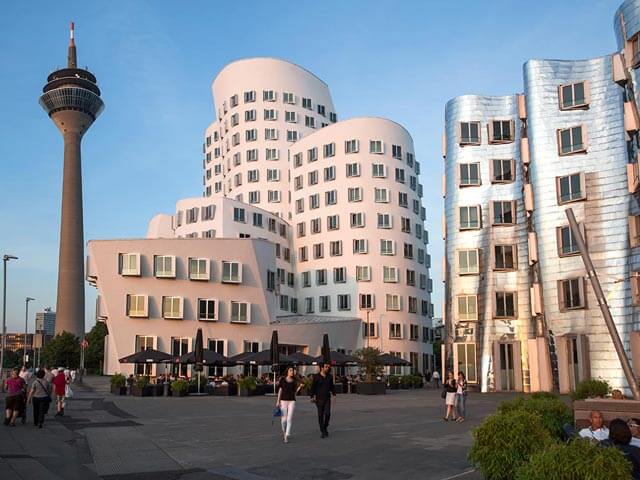 Dusseldorf is one of Germany’s cultural hotspots. This harbour city is home to a charming old town, the Altstadt, known for its great nightlife, as well as a thriving art scene and excellent shopping. Set on the River Rhine, temperate weather sees the river's waterfront promenade filled with walkers, picknickers, and locals and visitors alike enjoying its many cafes and bars. Only a short flight from Manchester and London, a weekend in Dusseldorf makes for a great getaway.

What to Know Before Visiting Dusseldorf

The city is served by Dûsseldorf Airport, and you'll find many flights to Dusseldorf daily. Only 5km from the city centre, the airport is easily reached by several local rail links. The local language is German, of course, but this is truly an international city, and most people speak excellent English. Beware of cartwheels! Cartwheeling is a tradition related to the city, so look out for tipsy tourists rolling hands over feet down the street.

The local currency is the Euro, and you can find ATMs around the city, though shops and most larger restaurants accept credit cards. Speaking of shops, keep in mind that Germany takes its Sundays seriously, and stores will be closed (bars and restaurants will be open, however). The city is one hour ahead of the UK.

When Is Ideal to VIsit Dusseldorf?

City breaks in Dusseldorf are a good idea at any time of year. In summer, average highs are a temperate 24°C. A flight and hotel for Dusseldorf just before Christmas is highly recommended. For the month of December, the city transforms itself into one of Germany's biggest Christmas markets, with crafts stalls, seasonal foods, and the tempting waft of spiced wine.

Package holidays to Dusseldorf are likely to coincide with some sort of festivities, as the city is brimming with events, fairs, and carnivals. One of the most colourful dates on the German calendar is Karneval. Expect parades, music, and plenty of the local 'Altbier' (Old Beer) to flow from the moment the carnival starts (on 11:11am on the 11th day of the 11th month) until the end of February, with only a break for Christmas!

What Are the Best Places to Visit In Dusseldorf?

What Is There to Do In Dusseldorf?

Sports fans are advised to book their package holidays to Dusseldorf during the football season! Fortuna Düsseldorf are an especially traditional football club. Typically yo-yo-ing between the first and second divisions of German football, they enjoy a fierce following in the city. And while their Esprit Stadium may not look like much from the outside, inside it rocks with particularly passionate fans cheering on the team in red.

Kom(m)ödchen is the place to go for theatre and political cabaret. Founded in 1947, this spot has been on the cutting edge of political theatre ever since. It was originally based elsewhere, but has been in its current spot since one night in 1967 when, during the intermission of a performance, audience members helped the actors carry the stage and all the props to its current home.

Where to Eat And Drink In Dusseldorf?

One of the best restaurants in Dusseldorf is also its oldest. Zum Schiffen dates back to 1628 and counts Napoleon himself as one of its famous guests. Get ready for a full weekend in Dusseldorf, with big portions of local dishes like 'Sauerbraten' (roast beef marinated in vinegar) and 'Himmel und Äd', black pudding served with roasted apples.

City breaks to Dusseldorf, or indeed, any German city, aren't complete without a visit to a 'Kneipe'. These small, community-minded bars are a staple of every German town and are usually cosy places full of local colour. In the Old Town, a classic example of these little pubs is simply called Kneipe, and is especially friendly. It has a singular range of speciality house drinks on offer.

Bring Home a Piece of Dusseldorf

How you’re travelling home from your weekend in Dusseldorf will have a big say in what you bring back. Whenever it’s practical, it’s always worth taking home a few bottles of Altbier. Otherwise, pick up memorabilia featuring the city's signature carthweeling figure.