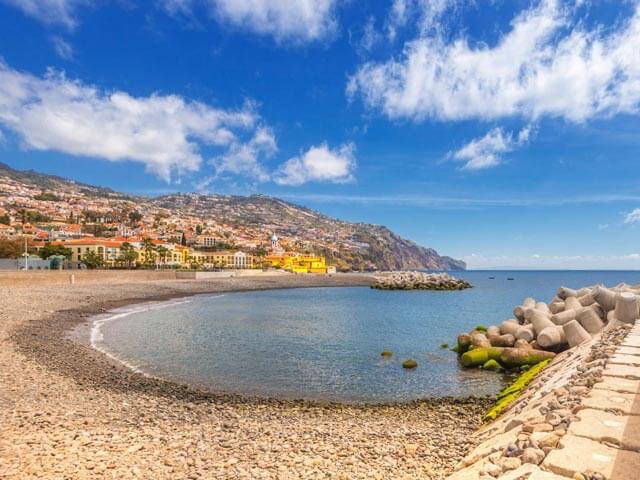 Finding your way in Funchal

The cliffs of Madeira's central massif shelve into the ocean at Funchal, which teems with life thanks to the region's volcanic origins. Package holidays in Funchal situate you in Madeira's largest city, which has served as its capital for five centuries – its long history is evidenced by its elegant colonial architecture and museums replete with art and artefacts. Take a cable car to the summit of Monte parish, or stroll in the urban gardens that adorn this seaside city.

Facts about city breaks in Funchal

Finding flights to and hotels in Funchal is easy. Flights from Manchester to Funchal depart just as often as flights from London to Funchal. Madeira Airport (FNC) snuggles between mountains and the Atlantic, just minutes from Funchal's sun-bleached streets. Located within the European Union, Funchal uses the euro. UK citizens do not require visas for entry. There is no time difference between the UK and Madeira, and many locals speak English.

When is the best time to visit Funchal?

Happily, Funchal is balmy year round, with temperatures remaining in the mid-twenties throughout summer. You'll find the golden sand beaches less busy in the winter, when temperatures can dip to around 16°C. There's even more fun to be had in Funchal during Carnival – entertaining parades fill the streets during this Easter celebration. Each spring, the Flower Festival sees the city garlanded in sprays of Funchal's numerous native flowers. The main squares are decked out in blooms, and the city's inhabitants take to the streets with colourful floats and festive zeal.

What is there to do in Funchal?

Obtain an overview with a ride on a cable car, which takes you 600 metres above sea level. The mountain views dotted with white buildings are ideal Instagram fodder. If you aren't interested in watersports at the marina, then wander down the Rua de Santa Maria, just as Funchal's locals have since the 15th century. You can even toboggan down the city's streets in a carro de cesto (a wicker sledge).

Frolic in Funchal's exquisite Quinta do Palheiro Ferreiro, which is eternally in bloom thanks to Portugal's pleasant weather. Explore the rose and sunken gardens, the French garden and the camellia avenue. This colonial estate is blooming with some 3,000 plant species. Meanwhile, the Monte Palace Tropical Garden comes complete with artificial waterfalls, a Japanese pagoda and a collection of African art.

What is there to see in Funchal?

Stumble into the 16th century at the city's cathedral. The impressive facade was constructed from stone cut from the cliffs at Cabo Girão, just along the coast. Look out for the silver cross commissioned by King Manuel I. Close by, the Santa Clara Convent is another ecclesiastical marvel. Dating back to 1492, its frescoes and cloisters offer serenity during city breaks in Funchal.

Escape the city on a hike through the verdant levadas (canals) running between the coast and mountains. These lush footpaths are nothing short of spectacular. For the best views of the city, head up to Pico dos Barcelos. Have a coffee 355 metres above the city and gaze out towards the Desertas Islands.

With exotic fruits at the local market and a diverse array of street food options, eating is a focal point in Funchal. Your weekend in Funchal proffers many culinary attractions. Why not try the following gastronomic gems?

Package holidays in Funchal are best remembered by investing in your own example of local embroidery. When shopping, look for items with a circular, blue tag, which means they were produced locally. You'll find blue-tagged wares in numerous shops in the city centre and at the Santa Catarina gardens. For a more temporary yet traditional souvenir, pick up some fresh flowers at one of the scented stalls that fill the streets. The flower stalls are decked with blooms year round. Alternatively, remember your weekend in Funchal forever with some locally made wicker items.