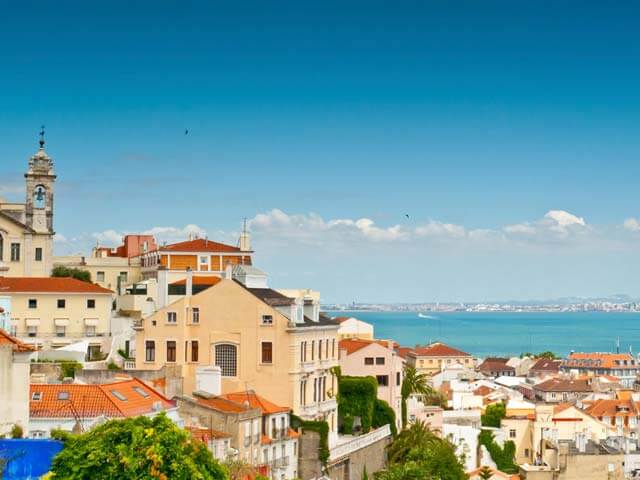 Getting to Know Lisbon

The Portuguese capital is on the country's east coast at the mouth of the Tagus River. It's one of Europe's oldest cities, making it the perfect destination for history buffs. Lisbon is a city built on hills, but don't worry–its iconic yellow trams are a reliable way to get up and down and enjoy the panoramic views.

Much of the city was destroyed in an earthquake in 1755, and the newer, rebuilt Pombaline Baixa area close to the river, with its grid of streets, fountains, and squares is an elegant contrast to the charming, winding streets of districts like Alfama, Chiado, or Bairro Alto. A weekend in Lisbon gives you the perfect opportunity to explore them all.

Portugal is part of the Eurozone, so you'll need euros for your Lisbon city break. Credit cards are widely accepted in larger shops and restaurants. Your first experience of the city when booking a Lisbon flight and hotel deal is the airport, situated just 7km out of town. Flights to Lisbon on a budget airline arrive at Terminal 2, whereas other flights to Lisbon from London arrive in Terminal 1. You can also get direct flights from Manchester to Lisbon, or from Edinburgh and Bristol. From the airport, a taxi into the city centre will take around 20 minutes, or hop onto the red metro line at the airport station.

Is there a good time of year to visit Lisbon?

Spring or autumn is the best time to visit Lisbon. Although winters are mild, there is more frequent rain than at other times of the year. Summer is hot and sunny and this brings the crowds into the city and the surrounding beach resorts. Plan your Lisbon package holidays for May or September, when the days are warm and there is more choice of accommodation. June is festival month in Lisbon, culminating in the Santo Antonio celebrations on the 12th. Lisbon city breaks at this time of year allow you to join in and party like a local.

What is there to do on Lisbon city breaks?

Lisbon is one of those cities which has something for everyone. History and culture fans will love the ancient fortress castle and numerous art galleries, sun worshippers might head along the coast to the beaches at Estoril, and shoppers can easily lose themselves in the upmarket stores in the Baixa area. Lisbon's enormous aquarium, Oceanário de Lisboa, offers a fabulous day out for kids of all ages, and sports fans will want to catch a game featuring one of the city's football teams, Sporting Lisbon or Benfica. Lisbon's tram network is an attraction in itself, with the traditional yellow trams featured on many images of the city. The 28 tram will take you through some of the city's prettiest and oldest districts.

A Lisbon weekend should start in the Baixa area, where the huge Praça do Comércio has views across the river and painted 18th century buildings. The large square is also a major transport hub, letting you take a train or metro elsewhere in the city. St George's Castle is one of the oldest buildings in the city and it's worth the trek to the top for the views across the rooftops. Perhaps the best musem is the Gulbenkian Museum, home to an eclectic collection of everything from Egyptian antiquities to Lalique glass. The impossibly picturesque Alfama district is a tangle of narrow streets and colourful houses, and after dark this is where to head to hear the city's traditional music, fado.

There are no shortage of places to eat during your package holidays in Lisbon, ranging from sandwich bars to Michelin-starred fine dining. Fish and seafood are staples, with dishes based around salt cod, sardines, or prawns. Delicious grilled meat is also in no short supply.

There's no shortage of shopping opportunities in Lisbon, and your main problem will be deciding what to buy. There are many artisan producers of tiles and ceramics still working in the city centre, making this a popular option. Articles made from cork are also in abundance, as are items featuring a cockerel, the unofficial emblem of Portugal. Or look for wooden sardines and mugs featuring fish, which make cost-effective and unusual mementos.