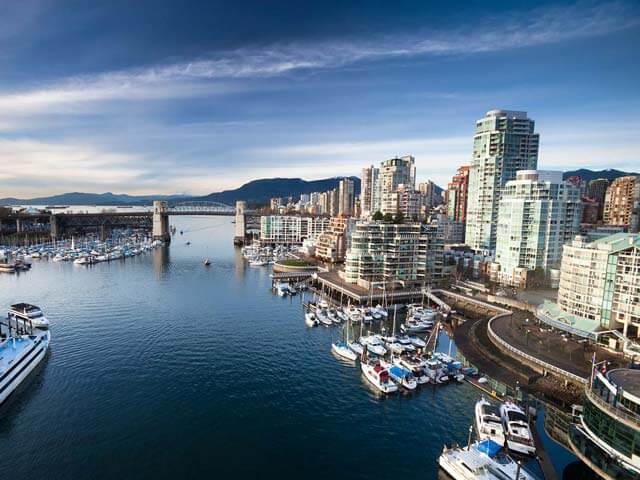 Get to Know Vancouver

There's a reason why diverse Vancouver welcomes so many visitors: this city set on the Salish Sea best exemplifies Canada's dual attributes of modernity and stunning nature. Once a 19th century settlement called Gastown, today, British Columbia's largest and most densely populated city is consistently ranked one of the world's highest for quality of life.

The city is home to industries as diverse as an active port and a thriving film and television production scene (so you might even find yourself talking to an A-lister!). Public transportation is excellent, and of course, you can easily access the surrounding mountains or head to the Pacific Ocean for time on the water. City breaks in Vancouver are wonderful for combining time outdoors with the sophistication of city life.

What to Know Before Visiting Vancouver

Brits, you don't need a visa to enter Canada, but you'll need to apply for an Electronic Travel Authorization (eTA) before booking your flight to Vancouver. You'll most likely receive approval within minutes. You'll arrive at Vancouver International Airport, and there are many options for flights from London to Vancouver, as well as flights from Manchester to Vancouver. The city is eight hours ahead of UK time.

Be sure to take out some Canadian dollars (the $1 coin is frequently referred to as a "loonie," while "toonie" denotes the $2 coin), at one of the city's many cash points, to have on hand for your weekend in Vancouver. English is the most widely spoken language, though it's common to hear Chinese while out and about, and French is used in official government buildings.

When Is Best to Visit Vancouver?

Vancouver is known for its mild winter weather. Between December and February, you can expect 0-10°C temperatures and dampness, but not a lot of snow. Temperatures increase to around 20°C and rainfall declines in summer months. A weekend break in Vancouver between the end of March and mid-April must include checking out some of city's more than 2100 areas filled with cherry trees.

Depending when you plan your package holidays in Vancouver, you should take part in one of the city's many celebrations.

What to do in Vancouver

Weekends in Vancouver offer fun activities for all ages.

Places to Visit in Vancouver

A trip to the 400-hectare Stanley Park, home to mountains, centuries-old trees, and historic landmarks, is a must for city breaks in Vancouver. You'll love walking along the Seawall, the world's longest uninterrupted pathway, close to both restaurants and the beach. See all of Canada thanks to FlyOver Canada, a simulation that suspends you in mid-air with special effects. Head to Granville Island for its markets, quaint streets, and galleries.

What Should You Eat in Vancouver?

At some point in planning your flight and hotel for Vancouver, work in a stop for a B.C. roll, the region's signature sushi roll. For dessert, a multi-layered, chocolate nanaimo bar is a local favourite. Blue Water Café in hip Yaletown is great for seafood, while the Diamond offers cocktails and sushi in a chic setting. By day, be sure to visit Revolver, a lovely cafe, or try something a little different at Bao Down, a Filipino restaurant in Gastown.

What Can You Bring Home from Vancouver?

Package holidays in Vancouver wouldn't be complete without a few souvenirs. First Nations art, in the form of jewelry boxes, ceramics, and home decor, can be found throughout the city. Chocolate Arts offers fine chocolates made with local ingredients. With over 200 types of tea, the Granville Island Tea Company is also a worthy stop.