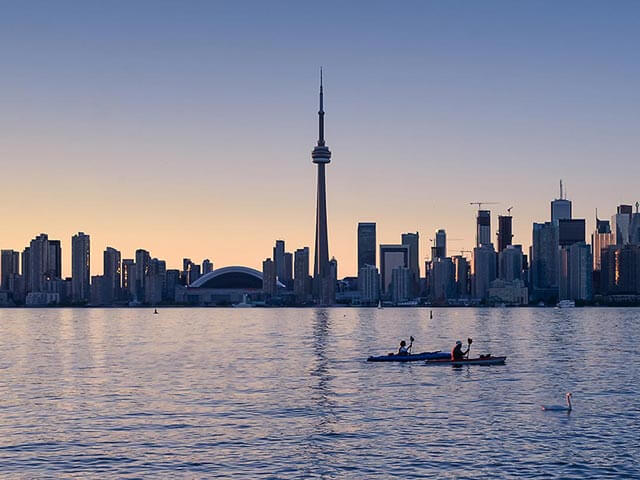 With more than 140 languages spoken in the city, Toronto is one of the world’s most diverse places. Somehow relaxed as well as being cosmopolitan, the city is home to almost every type of restaurant imaginable, as well as theatre, arts and shops to rival New York or London. It’s no wonder so many Brits take package holidays to Toronto. Some are even booking weekend trips to Toronto!

On city breaks in Toronto you can discover the beauty of a city on the shores of Lake Ontario. Once a frontier town, Toronto rose to prominence in 1834 when it achieved city status. As North America’s fourth largest city, Toronto is an international hub, and if you like world-class music events, an eclectic mix of bars and clubs and lively night scene, you could do worse than a weekend in Toronto or longer.

Toronto: know before you go

Take a flight from London to Toronto or a flight from Manchester to Toronto and you’ll land in the Toronto Pearson International Airport. From here it’s just a 25-minute ride on UP Express into downtown Toronto. Most visitors need either a visa or an Electric Travel Authorization to visit Canada, so do check this out before you book a flight to Toronto.

Canada’s currency is the Canadian dollar which is floated against the US dollar, and there are two official languages: English and French. Most French, however, is spoken in Quebec, and in Toronto, everyone you meet will speak English. Canada follows Eastern Standard Time (EST), which is five hours behind Greenwich Mean Time. The good news is that most people suffer worse jet lag travelling from west to east, so on the journey out you shouldn’t feel too bad.

When should you visit Toronto?

Toronto’s peak season falls between the summer months, from June to August, when the streets overflow with visitors and the streets spring to life. Toronto’s wide pavements make the city a delight to walk around, so book a flight and hotel in Toronto at either end of the season to beat the worst of the humidity the city is known for and see the sites on foot. Take city breaks in Toronto during the winter months and you’re likely to be greeted with a lot of snow. Ice skate in the park, see a winter light show or go cross-country skiing in High Park.

What can you do in Toronto?

Package holidays in Toronto won’t leave you disappointed. Sample delicacies from all around the world and stroll with ease around the city.

What can you see in Toronto?

Take a flight and hotel in Toronto and discover a city with lots to offer. From iconic landmarks to breath-taking nature, this a city with visitor appeal.

Eating out in Toronto: it’s a foodie’s delight!

Home to people from more than 200 locations, Toronto is truly multicultural, and that diversity extends to its restaurants. You’ll find excellent dim sun in China Town and fantastic chicken, chips and custard tarts in Little Portugal to the east of Brockton Village. Head to Leslieville for a wide array of trendy brunch joints or try one of the understated restaurants in Parkdale. Contrary to its name, little Italy is now home to some great quality Spanish food and pan Asian flavours, as well as steaming bowls of pasta and pizza.

Toronto is home to more microbreweries than ever, so make sure you try some craft beer while you’re here, and for a truly Canadian experience, don’t forget to sample some freshly made pancakes with maple syrup.

What souvenir should you bring home from Toronto?

Maple syrup has to be the number one Toronto souvenir, and if you love the flavour of the sticky stuff why not try maple sugar sweets, maple biscuits and maple flavoured lollies? If you like clothes shopping, pick up a pair of trendy John Fluevog shoes or some outdoor clothing made by Canada’s Roots brand. Take a Toronto Blue Jays shirt home with you or put a pin of the Canadian flag on your rucksack. You can’t get much more Canadian than a miniature Inukshuk (a man-shaped monument made of stone), but for a real treat head to Tim Hortons for some of the best donuts around. Just make sure you eat them before they go stale!