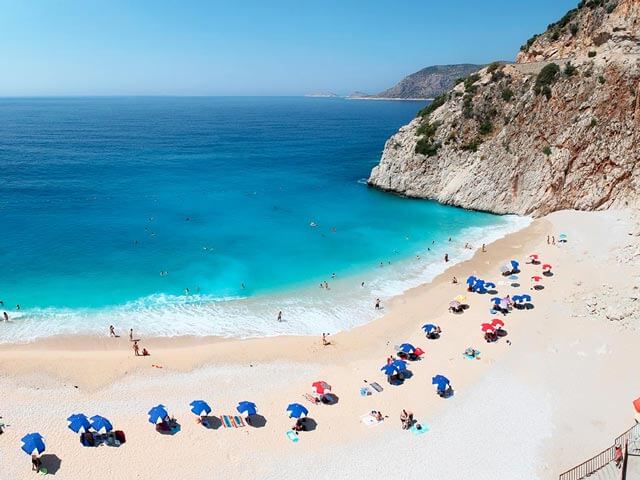 Settled almost 2000 years ago on the coast of the glistening Mediterranean Sea, city breaks in Antalya are the perfect answer for those who like their beach holidays with a side of culture and history. Replete with natural beauty, it offers travellers gorgeous beaches, clear and inviting waters, and invigorating views of the rugged Taurus mountains that cradle the city to the north.

It also boasts a rich history exemplified by its Roman-era harbour and old city filled with Ottoman-style caravanserais, mosques, madrasahs and Turkish baths. As the largest Turkish city on the Mediterranean, this bustling seaside metropolis makes a great place to explore Turkish cuisine, do some shopping and serves as a base from which to explore the many national parks and ancient ruins in the region.

Things to know before booking a flight and hotel in Antalya

Antalya is served by Antalya Airport, just 13 km away from the city centre. As the third-busiest airport in Turkey, you’ll have plenty of choices when booking your Antalya flight from London or elsewhere in the UK. There are even a number of flights from Manchester to Antalya every day. British citizens need an e-Visa to visit Turkey, which can be obtained easily online up to three months before travel. The local currency is the Turkish lira, and while traders in touristy areas might accept British pounds, for the best rates it’s always a good idea to withdraw lira from the ATM instead. Credit cards are increasingly accepted, but cash is still king when shopping in markets or travelling off the beaten path. Also, don’t forget that, while Antalya is a beach destination, Turkey is a Muslim country and the locals will appreciate respectful clothing that covers shoulders and thighs when away from the seaside.

A sultry destination that's not just for summer holidays

Summer is undoubtedly the most popular season to fly to Antalya and enjoy its gorgeous beaches, but for some the hot temperatures can make this destination better in the spring or autumn instead. Temperatures become pleasant from April and the weather stays warm until late October, making these non-peak months great for enjoying the sights and natural wonders surrounding the city. Antalya also hosts numerous exciting events throughout the year, such as Turkey’s most important film festival – the Golden Orange Film Festival – in October. No matter what time of year you choose to book your flight and hotel in Antalya, don’t forget the sunscreen – the city boasts an average of 300 sunny days per year!

Explore Turkey's Mediterranean jewel by sea and by land

For many on package holidays in Antalya the main attraction is the warm turquoise waters of the Mediterranean, and there are so many options when it comes to boat tours, kayaking and water sports. Some exciting day tours take visitors to see sunken ruins on glass-bottomed boats, while others offer excursions to the ancient city of Phaselis for a swim in the clearest waters of the ‘Turkish Riviera’. Back on land, keen shoppers can practice their haggling skills at Antalya’s bazaar, a colourful and chaotic traditional market where traders sell spices, jewellery, clothing, knick knacks and souvenirs. For a more relaxed shopping experience head to the quaint historic Kaleiçi district. Here you can find traditional Turkish crafts and fashion boutiques, as well as many visitor-friendly bars, cafes and restaurants to relax at when you’re done.

Fill a weekend in Antalya with blockbuster sites and natural wonders

Away from the beaches, Antalya is home to a wealth of historic and natural wonders that are an essential to any visit. Kaleiçi is the former walled city that makes up the historical centre of Antalya, and its narrow, winding cobblestone streets and Ottoman-era architecture make it a pleasure to stroll around. Within the city and nearby are also many incredible ancient ruins. Some popular and off-the-beaten path sites include:

Antalya Province is also home to numerous national parks, including Koprulu Kanyon and Alt?nbe?ik Cave national parks, as well as the picturesque Duden and Kursunlu waterfalls. Take a break from the outdoors at the Antalya Museum, which is considered one of the best archaeological museums in the country and is one of the city's most popular attractions.

To prepare for so much adventuring, every morning of an Antalya weekend should start with a classic Turkish breakfast. The Turkish mean business when it comes to breakfast, and a traditional kahvalti will undoubtedly feature numerous plates filled with cheeses, meats, meze dips, olives, honey, salads, bagel-like simit, and flat bread. For other meals Antalya offers all the Turkish delights – like grilled meats, lamachun, börek, gozleme and pilaf – as well as an array of wonderful seafood dishes that make the most of its idyllic seaside location. Antalya has plenty of restaurants geared for travellers, but head to a cafeteria-style lokanta for authentic and hardy food at reasonable prices. In the evening make your way to a mayhane for meze, traditional food, and plenty of beer and ouzo.

At the end of package holidays in Antalya, the city's colourful and exotic warmth can easily be brought back with you. Traditional Turkish gifts and souvenirs include textiles and carpets, beautiful jewellery, and Ottoman-style decorative goods handmade from copper, wood or leather. Be careful when buying antiques: it's illegal to buy, sell, and export items over a certain age that are considered antiquities. Must-haves for the foodies in your life are things like spices, coffee and tea, and of course Turkish delight – all of which can be bought in the many local markets.