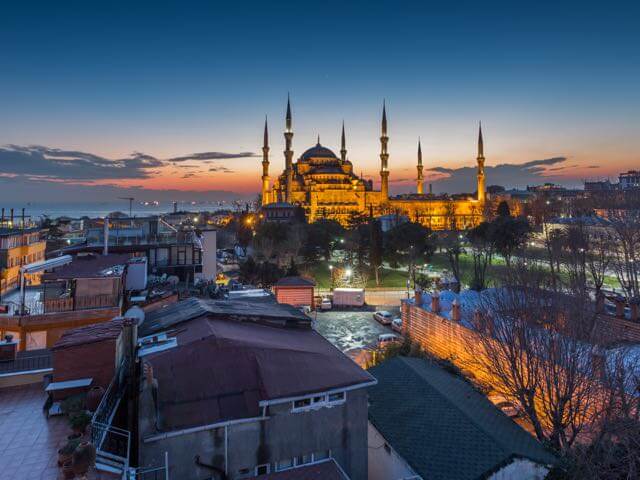 Straddling the Bosphorus Strait that divides Europe from Asia, Istanbul is a truly remarkable city. It was probably first inhabited around 1000 BC and has been an important crossroads for millennia. Known by the Greeks as Byzantium, the city was taken over by the Romans in the early 100s BC, and re-named Constantinople in 306 AD. Besieged in turns by Arabs and Barbarians, the city was finally captured by 15th century Ottoman Turks who re-named it Istanbul. It was to become the Ottoman Empire’s last major city and remained a major political and commercial hub until being occupied by the Allied Troops during World War I.

These days, reminders of the past are everywhere, from the minarets on the skyline and cobbled streets to the glittering Sea of Marmara, lined with fisherman. Package holidays in Istanbul let you discover a world not only split by two continents but also split between the ages.

British nationals and most other travellers need a visa to enter Turkey. There is a simple online e-Visa application system although it’s possible to obtain a visa once you’ve landed inside the country, right at the airport. Prices, however, will be higher than those purchased online (although still reasonable). The city is served by Ataturk International Airport and Sabiha Gokcen Airport, and a third is in development. It's easy to book a flight and hotel for Istanbul.

Fly from Manchester to Istanbul and you’re likely to arrive at Ataturk, but fly from London to Istanbul and you could arrive at either airport. Istanbul is three hours ahead of the UK. The currency is the Turkish Lira, and Turkish is the official language. Though a diverse city, you’re unlikely to find many people off the tourist circuit speaking English, but on a package holidays to Istanbul, there will be enough English spoken for you to get by.

When Should You Visit Istanbul?

Peak season runs from July to August, and that’s when visitor numbers swell and the temperatures soar. But book a flight and hotel in Istanbul during the off-season months between March and May or September and November for comfortable temperatures hovering in the 20s. If you don’t mind some rain, it can be nice to take a weekend break in Istanbul during the winter months. It will be cold, but fly to Istanbul in January or February and you’ll get a feel for a different side of the city.

What Is There to Do in Istanbul?

Whether you're immersing yourself in the haunting sound of the call to prayer or seeing the city from a boat on the Bosphorus, city breaks in Istanbul let you feel as though you’ve stepped into another era.

What is There To See in Istanbul?

Istanbul’s history leaps out as you stroll through its streets and discover a world both old and new.

Dining Out in Istanbul

City breaks in Istanbul are a foodie’s dream. The city even has its own Istanbul Gastronomy Festival, held each February, for which it's well worth making a weekend Istanbul trip. From delicious, meaty kebap and lahmacun, the Turkish take on pizza, to tasty manti, a Turkish-style ravioli, there's so much to eat. On the street, you can seemingly pick up a simit, a sesame-seed coated bread to snack on, or freshly-squeezed orange or pomegranate juice, at every corner.

A beverage to try is ayran, a salty yogurt drink that visitors either love or hate. Turkish delight is the obvious sweet to sample, with flavours ranging from rose to pomegranate. Layers of pastry and honey known as baklava and the delicious sutlak rice puddings are just two more desserts to try.

For a delicious daily lunch menu, try Kantin, and for traditional menemen, an egg breakfast dish, head to Lades 2. For a selection of great mezze dishes, give Asmali Cavit a try, in the hip neighbourhood of Beyoglu.

Shopping in Istanbul: What to Bring Home

Purchase bedspreads and linens from the Grand Bazaar, or find yourself handmade jewelry. Keep in mind that a little negotiation is typical! Take a Turkish rug home for a continual reminder of your city break to Istanbul or light up your home with one of the beautiful glass lamps you see everywhere. Pick up spices from the Spice Bazaar or find some handmade shoes. There’s also a modern side to Istanbul, of course. Check out the hip boutiques close to Galata Tower or pick up some trendy labels at Beymen Department Store.