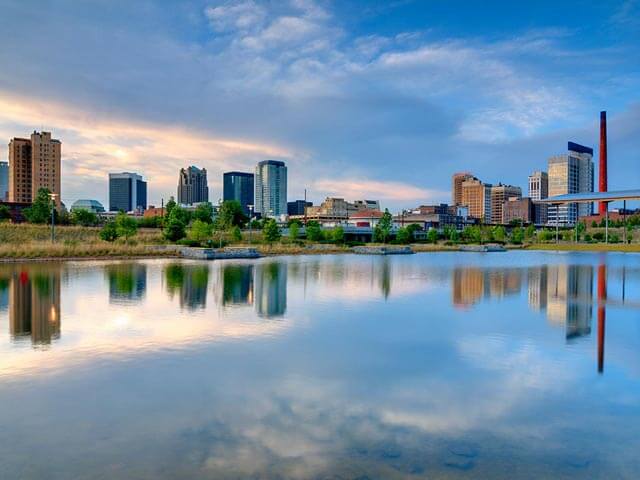 Located in the Midlands, 120 miles north west of London, the city of Birmingham has undergone a reinvention in recent years, celebrating its industrial past and regenerating down-at-heel areas to create new visitor attractions and pleasant areas alongside the canals.

What To Know Before Visiting Birmingham

If you want to spend a weekend in the Midlands, you can fly to Birmingham from several UK regional airports, including Manchester and London where flights go from Heathrow, Gatwick and London City. Birmingham Airport connects easily with the city centre via a free Air-Rail system, which takes visitors to Birmingham International Station. Choose a flight and hotel in Birmingham and you can stay right in the centre of town without having to worry about a long transfer from the airport.

When Is The Best Time To Visit Birmingham?

No matter what time of year you choose to take city breaks in Birmingham, the weather will be changeable. It's likely to be milder and drier in summer, but it's also likely that you'll experience cold and rainy days in August and mild and dry days in December! Make the most of the city's vibrant multicultural community by taking package holidays in Birmingham at the same time as one of the many exciting festivals celebrated in the city throuhout the year. Diwali is an especially lively affair, taking place between October and November and involving a parade with musical performances and a firework display.

What To Do In Birmingham?

Birmingham is home to 100 miles of canals which were formerly used for industrial purposes, but are now home to barges taking visitors on pleasure cruises. This is a great way to see the city from a different viewpoint while enjoying city breaks in Birmingham. Some barges even provide lunch, afternoon tea or dinner. Sports fans can attend football matches involving one of the city's two team; Aston Villa and Birmingham City. They play on Saturdays during the season.

Shoppers will love spending the day at the Bullring Shopping Centre, home to one of only four Selfridges stores in the UK. End your night with a trip to the Birmingham Repertory Theatre or a night at The Glee, where you can see top comedians performing every weekend.

What Places To Visit In Birmingham?

What To Eat In Birmingham?

No weekend in Birmingham would be complete without a trip to one of the city's excellent curry houses. The city's Indian, Pakistani and Bangladeshi community are even responsible for creating entirely new curry dishes just for the UK market, including balti dishes which were first cooked at a Birmingham restaurant called Adil's in 1977.

The Black Country (the name by which the area around Birmingham is known) is also home to some ingenious British dishes, such as Groaty Dick, a stew made with beef, leeks and onions, and Brummie bacon cakes – savoury scones which have bacon and cheese added to the mix. Wash it all down with a pint of Mild, the city's favourite beer, or Lambswool, a spicy cider-like punch made with baked apples.

What To Bring From Birmingham?

Don't forget to pick up some Cadbury goodies if you visit Cadbury World – though any chocolates you buy might not make it home! Birmingham Blueware china has been popular for decades, and Birmingham Library sells a range decorated with famous buildings in the city. Pick up a print or sketch of the city to remind you of your weekend in Birmingham. Many souvenir shops also sell historical photos or paintings of what the city looked during its industrial heyday.