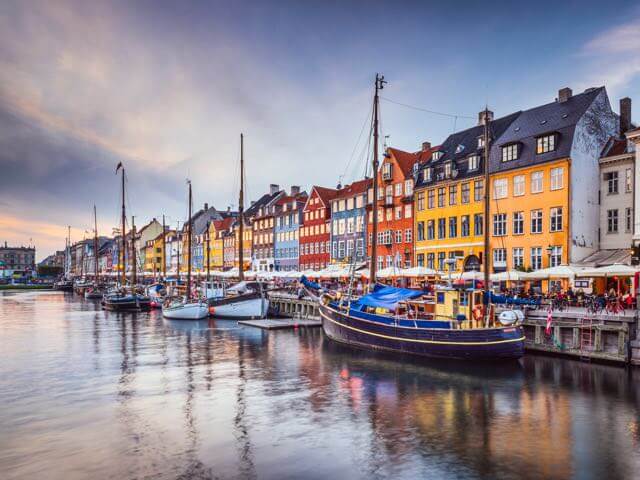 Copenhagen for a weekend away

Copenhagen, the capital of Denmark and the gateway to the rest of the country, is separated from Sweden by only the Strait of Oresund and its amazing bridge. Copenhagen has come a long way from its original days as a Viking fishing village, as today the greater metropolitan area includes more than 2 million inhabitants.

The city is home to the royal family of Denmark and boasts historic and modern impressive architecture. It has a unique culture, linking Scandinavian tradition with that of central Europe, and has increasingly become known for its sense of style and design, imitated around the world. Book a flight and hotel in Copenhagen for a relaxing weekend getaway.

Things to know before booking your Copenhagen flight and hotel

City breaks in Copenhagen are easily accessible from the UK. Flights from London and Manchester arrive at Copenhagen Airport (CPH), the city's major international airport. With just one-hour time difference from the UK, travelling to Copenhagen is easy. Whereas many Danes speak English fluently, a friendly greeting in Danish is always appreciated by locals. The currency used in Denmark is the Danish krone.

What time of year is best for package holidays in Copenhagen?

Package holidays in Copenhagen can be enjoyed at any time of year. While April to October are the prime months for visitors, the Danish concept of hygge has made visiting in the winter much more appealing. Hygge, though not directly translatable, roughly equates to the feeling of comfort from life's simple pleasures. The concept, now a global trend, is exemplified in Copenhagen during winter: cosy cafés, candlelight and snowy views. Be sure to dress warmly to enjoy your hyggeligt weekend in Copenhagen.

For more temperate weather conditions, a visit in late spring or summer is recommended to make the most of Copenhagen's famous bicycle culture and sandy beaches.

What is there to enjoy during city breaks in Copenhagen?

When planning your package holiday in the Danish capital, there are plenty of activities to add to your list:

What are some must-see attractions in Copenhagen?

Copenhagen is known for its style and sense of design, which is reflected in its fashion, architecture and art. To experience it for yourself, plan a visit to the ARKEN Museum of Modern Art or, for something a bit more historical, try the Danish National Gallery. Strøget, one of Europe's longest pedestrianised shopping streets, boast shelves full of Danish style.

The architecture of the city is best explored by bicycle, arguable Danes' favourite mode of transportation – there are more bikes in Copenhagen than there are people! Rent one during your weekend in Copenhagen and explore some of the city's top attractions such as the Tivoli Gardens, the Little Mermaid Statue and the Christiansborg Palace. Then, hop off your bikes for a walk around the hippie town of Christiania, one of Europe's most unique communities.

Eating and drinking in Copenhagen

Danish food is becoming increasingly popular worldwide; get ahead of the curve by trying some of these Danish specialties during your Copenhagen weekend:

Once you've crossed a few traditional dishes off of your list, be sure to explore the streets of the city, which are filled with charming cafés serving strong coffee, internationally recognised craft breweries such as To Øl and award-winning restaurants such as Noma.

Remembering your time in Copenhagen

All city breaks in Copenhagen must come to an end. However, you can keep the memories alive by bringing home a curing kit to make your own gravad laks, some exclusive blue and white porcelain from Royal Copenhagen or some traditional Danish liquorice. Whatever your choice, it will surely remind you of the city's unique style!