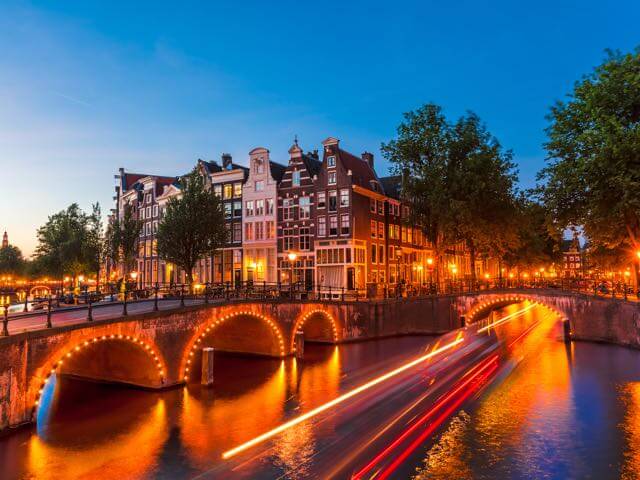 Get to Know Amsterdam

During the 17th century, Amsterdam was the world's economic stronghold. Today, much of that bristling energy endures thanks to the city's seamless combination of Old World charm and modern businesses. Located in the eastern Netherlands and connected to the North Sea, Amsterdam is quite flat, making navigation simple. To fit in with the locals, bike your way through the city – many people still cycle to work. Looking for some great pictures? Capture the beautiful Amstel River, which runs from the south of the city to the north, or take a photo of one of the many canals, which are often peppered by the colourful houseboats you see in films. Whether you're floating along a canal, crossing one of its many bridges, or biking happily through the picturesque streets, you'll feel invigorated. Package holidays in Amsterdam make your senses come alive.

What to Know Before Visiting Amsterdam

The fun starts as soon as you land at Amsterdam Airport Schiphol, the city's main airport and one of the biggest in Europe. Check out its tax-free shopping, museum, and spa. A simple 15- to 20-minute train ride will take you straight to Amsterdam's downtown. Since the city's big on drawing travellers from around the world, Amsterdam flights and hotels are easy to come by. Better yet, English is widely spoken despite Dutch being the official language, so you'll get the most out of its attractions. Be sure to convert your money to Euros, and keep in mind that if you're visiting from an EU nation or America, you can spend as many as 90 days in the country without a visa. The best part? Brits won't have to worry about jet lag, as there's only an hour difference between the UK and the Netherlands. Whether you're travelling to Amsterdam from London, Manchester, or another location, flights to Amsterdam are hassle free and quick.

When Is the Best Time to Visit Amsterdam?

Mid-March to early May is the perfect time for a spring weekend in Amsterdam: tulip season is in full bloom and you'll be surrounded by technicolour fields of gorgeous flowers. Peak travel season booms in summer and then simmers in autumn, an ideal time for enjoying the crisp weather and less-occupied flights and hotels in Amsterdam. For an unforgettable trip, visit between the last weekend in April and the first weekend in May, when the whole city becomes a titillating party in celebration of Queen's Day and Liberation Day. Amsterdam animates like no other city, hosting over 300 festivals annually – at any time of year, you're sure to catch some sort of party. The hottest months tend to be July and August, when temperatures average around 17°C.

What To Do In Amsterdam

Make the most of your visit by visiting one of the city's many lush parks. Check out the whimsical Vondelpark, the city's largest, where you can bask in a stunning rose garden featuring over 70 types of roses while enjoying a drink from one of the local restaurants. You'll be mesmerized by the vintage shops and museums lining the Jordaan, one of Amsterdam's most iconic neighbourhoods. There's no better place to get lost – make sure to take your camera! For some retail therapy, head to Magna Plaza and shop at your favourite stores, housed in a gorgeous building that's an attraction in itself. Cap off your night with some invigorating dancing at WesterUnie, or take in some live soul and jazz in Bourbon Street.

What Can You Visit in Amsterdam?

For good reason, travellers often spend their city breaks in Amsterdam at Museumplein, a cultural hub that houses the Van Gogh Museum and the Rijksmuseum, where you can marvel at legendary art. The Anne Frank House, one of Amsterdam's most visited places, plunges you into a dark part of the city's history. Film lovers won't want to miss EYE Filmmuseum, a unique building with incredible film exhibits. A quick – and free – ferry ride to NDSM in Amsterdam North unleashes a world of possibilities, including festivals, dance parties, and restaurants. Experience a fairytale evening during a boat tour on the Canal Belt, an experience that's both informative and stunning thanks to the gorgeous surroundings.

What To Eat In Amsterdam

Foodies will feel right at home at Westergasfabriek, a delicious nexus of restaurants, pubs, and markets, or Foodhallen, a food haven located in the De Hallen cultural complex. Here, you'll find all types of street gastronomy, from wood-fired pizzas to Greek delicacies. If you're in the mood for something savoury, try bitterballen, deep-fried meatballs that will leave you anything but bitter. Give your weekend in Amsterdam a sweet touch with a stroopwafel, two thin waffles stuck together with a light layer of syrup. City breaks in Amsterdam wouldn't be complete without stopping at a cheese shop. Your senses will tingle as you gorge on sumptuous Dutch cheese (or 'kaas').

What Can You Bring Home from Amsterdam?

Whereas package holidays in Amsterdam are a gift themselves, a souvenir is always nice as well. A bottle of Bols Jenever hits the spot – given that it's been manufactured in Amsterdam since history can remember, you'll feel that Dutch flair with every sip. HEMA is a popular Dutch chain store that sells inexpensive products, including authentic Gouda cheese and the country's famous Delft Blue pottery. If you're a football fan, look for Ajax memorabilia throughout Amsterdam. The Dutch are also known for their birthday calendars (traditionally hung in the loo), so pick one up if you're bad at remembering important dates.