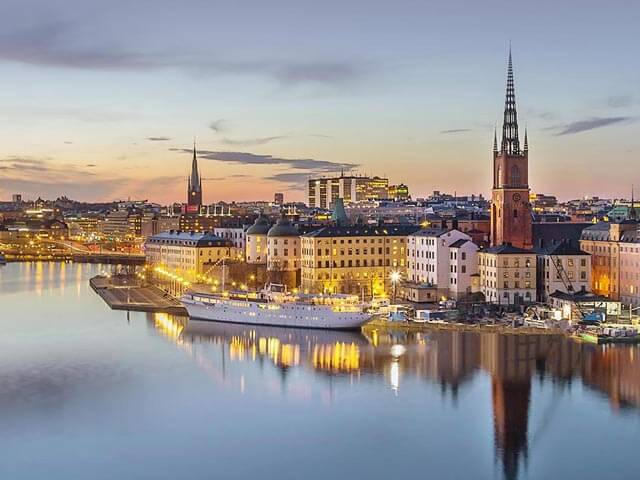 A city steeped in history

While Stockholm may be associated with modern design, the city also has an intriguing history. Its Old Town (Gamla Stan), which was built in the mid-13th century, gradually expanded as the city grew in economic importance. With cobbled alleyways and modern constructions side by side, Stockholm’s architecture is a testament to the city's interesting evolution.

Package holidays to Stockholm also promise a geographically diverse adventure. The city is close to Lake Mälaren and the Stockholm archipelago, a cluster of 30,000 small islands that are world famous for their unspoilt beauty.

What to know before you go

Grab affordable package holidays to Stockholm with flights from both London and Manchester. Stockholm is highly accessible and boasts four airports, the main one being Stockholm Arlanda (ARN), which is a 20-minute train ride to the centre. You’ll arrive in Stockholm one hour ahead of UK time, and likely breeze through security since UK nationals do not require a visa when travelling to Sweden. The official language in Stockholm is Swedish, but English is widely spoken.

You will need krona, Sweden's official currency, to splash your cash during city breaks to Stockholm. ATMs are aplenty but be aware that Swedes are strong advocates of a cashless society, so you may be expected to pay with your debit or credit card.

As with the UK, the best time for a weekend in Stockholm is summer. The days are long and warm with average temperatures of 16–18°C. Winter, the coldest period, sees temperatures below 0. However, if you're seeking festive Scandinavian vibes, this is a lovely time to book a flight to and hotel in Stockholm.

Any weekend in Stockholm guarantees fun and the chance to discover new experiences. Amid cute Christmas markets, December brings Lucia Day, a celebration full of candlelit processions, saffron buns and mulled wine. In summer, Stockholm hosts Parkteatern, a free outdoor theatre festival that began in 1942. On the 6th of June, there’s Sweden’s National Day, which is popular with visitors hoping to glimpse the Swedish royal family attending Stockholm’s open-air Skansen museum in their traditional yellow and blue dress.

Stockholm is known for its dynamic art scene and thriving bars. Many visitors love Stockholm purely for its healthy obsession with contemporary photography and politically motivated art. Fotografiska is particularly popular – not only for showcasing up-and-coming and unique artists and photographers but because its hip top-floor café offers some of the most exquisite views of the city.

Stockholm's nightlife is also one of the city's top attributes. Clubs such as The Soap Bar and Sturecompagniet attract upbeat crowds, while travellers and locals those looking to relax with scrummy tapas and gorgeous panoramic views head to Mosebacketerrassen.

What else should you do in Stockholm?

Stockholm, otherwise known as 'Venice of the North', comprises 14 islands on the banks of the archipelago where Lake Mälaren joins the Baltic Sea. The nearness of the water makes Stockholm a top choice for nature lovers. While the charms of the archipelago are less than an hour's train away from the city centre, there's also a number of family-friendly beaches closer to town, such as those on Långholmen island. If a beach day doesn’t tickle your fancy, there are several other options:

Although Swedish food is so much more than meatballs and herring, you really must try these local favourites when you’re in Stockholm. For fresh fare, check out Östermalms Saluhall, an indoor food market that’s been around since 1888. The stalls are overflowing with traditional Swedish cuisine, and the setting is beautiful.

If you’re after a decadent supper, Esperanto offers Swedish-Japanese fusion dishes against a luxurious backdrop of an old theatre. Meat lovers should head to Rolfs Kök to try some its legendary sticky pork, or Shahrzad, which serves up fragrant Persian dishes.

What to take back to remember your trip

After sorting your flight to and hotel to Stockholm, take inspiration from our go-to list of typical and charming gifts to look out for while you're in Sweden: