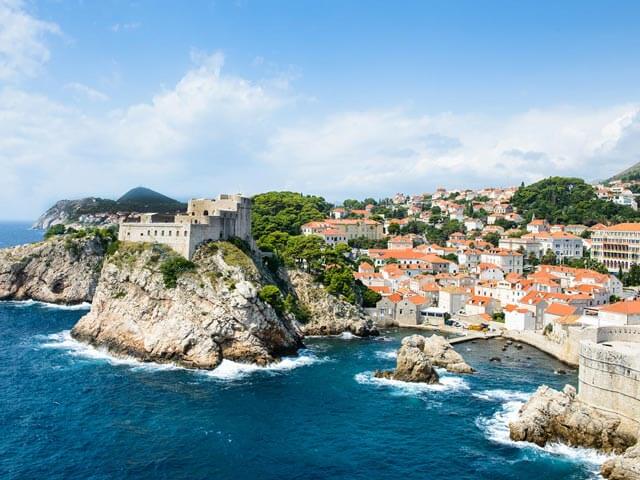 Pearl of the Adriatic

Dubrovnik is a spectacular and intact walled city situated on Croatia’s extreme south coast. Its location makes it one of the most beautiful resort cities on the Mediterranean, and therefore package holidays to Dubrovnik are popular. During medieval times, Dubrovnik became the only city-state on the Adriatic that could rival Venice. In the 15th and 16th centuries, the city underwent a lot of development. Its rich historic heritage also means that Dubrovnik is home to some truly magnificent architectural wonders so it's no surprise that the city is a UNESCO World Heritage Site.

The stunning fountains, interesting museums, inspiring monastery and spectacular churches are a sight to behold. Discover all the magnificence the city has to offer by booking a flight and hotel in Dubrovnik. There has also been a surge in the popularity of city breaks to Dubrovnik in recent years because of the award-winning HBO series Game of Thrones. The show has shot at various locations in the walled old town, and used CGI to recreate many prominent buildings.

What You Should Know Before Visiting Dubrovnik?

Before booking a flight to Dubrovnik, you'll be pleased to know that UK citizens do not need a visa for travelling to Croatia, which makes city breaks to Dubrovnik easy, as long as your trip does not exceed 90 days within a six month period. The city is served by ?ilipi Airport. Many flights operate throughout the day between London and Dubrovnik alongside other UK cities to Croatia. A flight and hotel in Dubrovnik is only the start of your Croatian adventure.

Even though it's part of the European Union, the country uses the Croatian Kuna as currency. You should use cash over cards as much as possible so that you're not subject to bank fees, which is the norm on most debit and credit cards issued in the UK. Croatia is one hour ahead of the UK. Croatians generally speak their own language at home but you will find many locals who can converse fluently in English.

When Is The Best Time To Visit Dubrovnik?

The best time to take a holiday in the city is during September and October, as it is not stifling hot and the sea water is warm enough to enjoy a good swim. May and June are also good months to visit Dubrovnik, but the city will be a lot busier during this time.

If you're a music and culture buff then you might want to visit during July or August as two of the city's most prominent festivals take place during this time. The Dubrovnik Summer Festival, which has been held every year since 1949 from July 10 to August 25, is a theatre and music extravaganza where over 2000 artists from 30 nations put on musical and drama performances. There is also the Libertas Film Festival that takes place in late August.

What To Do In Dubrovnik

Going on a 'Thrones' walking tour is a great activity, even if you're not a big fan of the show. This is because it takes you to some of the most prominent landmarks in the city. Many package holidays to Dubrovnik can help you organise the Thrones walk as part of your deal. Swimming in the sparkling Adriatic Sea, right under and along the old wall, makes for a memorable experience.

Nightlife in Dubrovnik is energetic yet unusual. One moment you could find yourself partying near an erstwhile quarantine barrack’s stone walls or inside a 16th-century cavernous fort. It is however, not all about dancing the night away during your weekend in Dubrovnik. There are many quaint bars on Placa Street where you can sit down for a quiet drink. Do try the local wines and Rakia – one of the most popular Croatian drinks made from an assortment of fruits. It comes in variations, for example, orahovica is made with walnuts, loza from grapes and sljivovica from plums.

Places To Visit In Dubrovnik

The following are the main attractions and points of interests in Dubrovnik which you should check out on your weekend Dubrovnik trip.

What To Eat In Dubrovnik

Dubrovnik is known for its fresh meat dishes and local seafood, which can be found in most of the restaurants in the old town. Croatian delicacies are not too spicy and some of the most popular dishes include the sweet Dubrova?ka rozata, stewed meat dish pasticada and zelena menestra, which is a delicacy comprising meat, veggies and many types of cabbage.

What To Bring From Dubrovnik

When you go souvenir shopping, check out the delightful handmade napkins, linens and tablecloths. The little dolls dressed in traditional costumes make for an interesting token gift to pick up for friends or family back home. Most of the shops centred in the old town cater to the sale of souvenirs and others curios that may interest visitors – especially along the Stradun central street. Outside of the city walls, there are mostly scattered shops and small shopping centres like Mercante , Tommy and Pemo in Gruz and Lapad .