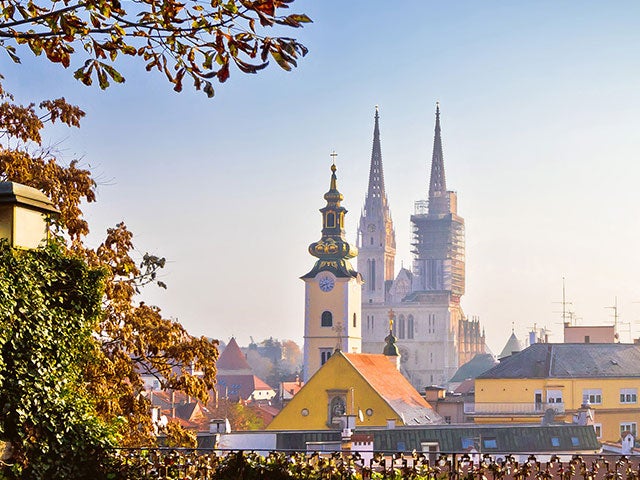 Located in the north of the country, not far from the border of Slovenia, Zagreb is Croatia's capital and largest city in Croatia. Although modern Croatia is a relatively young country, formed in the 1990s after the break up of the former Yugoslavia, Zagreb itself is a historic city, home to churches, palaces and museums dedicated to this area's fascinating story.

What to know before visiting Zagreb?

The currency in Zagreb is the Croatian kuna, and the main language is Croatian, though most people working in the travel industry will speak a bit of English. UK citizens will likely not need a visa for package holidays in Zagreb, and the city is one hour ahead of the UK.

Franjo Tuman Airport (ZAG) is located about six miles south of the city centre, with a regular airport shuttle bus taking arrivals to the main bus terminal in Zagreb. ZET (Zagreb Electric Tram) launched a new line from the airport in 2017, with several stops in the city centre. Flights to Zagreb depart from a number of UK airports. You can fly from Manchester and London's Heathrow. Gatwick, Stansted and London City airports.

When is the best time to visit Zagreb?

Summer city breaks in Zagreb are warm and sunny, with temperatures regularly reaching 30°C. Winters are much colder and wetter, and snow is not an uncommon sight, as Zagreb lies in the foothills of Mount Medvednica. Each July sees the city host the International Folklore Festival, a celebration of Croatian culture featuring musical performances and traditional craft demonstrations.

What to do in Zagreb

Lovers of the great outdoors may want to spend some time exploring Mount Medvednica on their weekend in Zagreb. The mountain is only a short drive from the city. Once there, you can enjoy hiking through the dense forests that cover its slopes or take a ride to the summit in a chairlift to enjoy the view. In the winter, Mount Medvednica becomes a popular winter sports centre and regularly holds World Cup slalom races on its slopes.

Spend the evening at the beautiful Kino Europa, a cinema built in 1924 that now screens arthouse movies and hosts festival events. If their movies aren't to your taste, enjoy the atmosphere with a drink in the cinema's lively bar. On sunny days, head for Medvedgrad, an unassuming bar in the city centre with its own microbrewery and a large outdoor terrace.

Places to visit in Zagreb

City breaks in Zagreb are about much more than sampling the local beers. You'll find a wealth of cultural and historical sights to enjoy on a weekend in Zagreb.

What to eat in Zagreb

Cottage cheese and sour cream make a popular combination in Croatia. Štrukli, a dish particular to Zagreb, features the two ingredients wrapped in a kind of thin dough. ?ušpajz is a lovely, warming stew made with meat and vegetables – be sure to try it at one of the mountain restaurants if you make the trip out to Medvednica on your weekend in Zagreb, followed by knedli, sweet potato dumplings stuffed with fruit. Also, try Croatian wines such as the ever-popular Graševina.

What souvenirs can you find in Zagreb?

A Licitar heart is a great souvenir of package holidays in Zagreb. These intricately decorated red hearts, originally made from gingerbread, are now available in souvenir plastic versions – though there are a few artisans still making the real thing. Head to Kras to pick up some chocolates or 505 s crtom, a favourite Zagreb hard candy that seems to last forever!