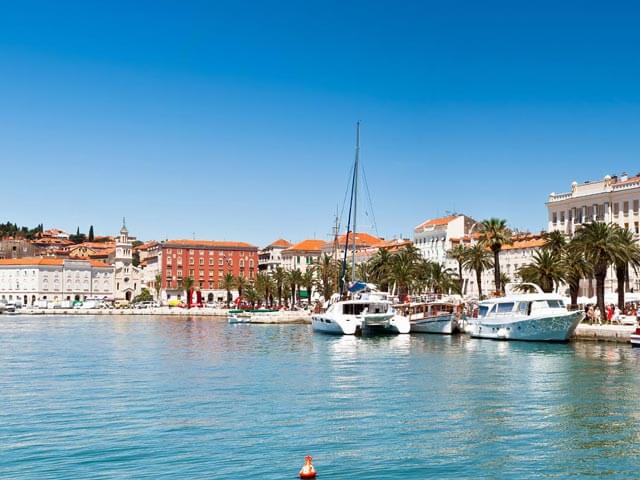 From Roman beginnings to the EU

Split, Croatia’s second-largest city, is located in the south of the country on the eastern shores of the Adriatic Sea. It first evolved as a Greek settlement and was later home to the Roman emperor Diocletian, whose palace in Peristyle Square continues to attract thousands of visitors each year.

Split, like much of Croatia, is home primarily to Croats, Serbs and Slovenes. The city was annexed by Italy during WWII and then incorporated into Yugoslavia in the post-war period. Not until 1991 did Split become part of modern-day, independent Croatia. The country was assimilated into the European Union in 2013.

Tips before you fly

Package holidays in Split are popular with British visitors as the city is easy to access from a number of UK locations. Bag a flight to and hotel in Split, with regular departures from both London and Manchester. While they normally include a short layover in another European city, you can still get to Split in just over 4 hours.

Your weekend in Split will begin at the city’s international airport (SPU). You can take a bus or taxi to reach the city centre. UK visitors can enter Croatia freely without the need for a visa. Croatia is one hour ahead of the UK, and visitors should be aware that the local currency is the kuna, although euros are accepted in some establishments.

Split is often considered a summer destination. Package holidays into Split in the warmer months will appeal to those hoping to top up their tans and experience the city’s nightlife at its peak. Average temperatures in the summer are in the mid-to-high 20s, the weather between May and August is typically hot and dry. Croatia’s Mediterranean climate means mild winters, with temperatures below 7°C unusual.

The area has a full calendar of cultural events, making city breaks to Split popular year round. For young, beachy vibes, join the party at Ultra Europe music festival in July. Film fans may want to head to Split in early June when the city hosts the Mediterranean Film Festival, which livens up the city with independent film screenings, exhibitions and after-parties. Around February, the city has its annual carnival, bringing fireworks, parades and music.

Split is a rare mix of ancient city, with exquisite Romanesque architecture, and busy, vibrant life to be experienced on every corner. All city breaks to Split call for a visit to 1,700-year-old Diocletian’s Palace, as well as a walk up the bell tower of the Cathedral of St Domnius. The panoramic views of terracotta roofs, tantalising, deep-blue ocean and the Mosor mountain range are well worth the climb!

Package holidays to Split should include a day trip to Krka National Park, where locals and visitors alike can bask in the delights of cyan-tinted gorges and refreshing waterfalls. You can take local buses to the park, and the journey takes a little over an hour.

What not to miss

With your flight to and hotel in Split organised, turn your attention to this handy list as you prepare your itinerary:

City breaks to Split are a cuisinophile’s dream. In town, there are many local taverns – one to try is Konoba Varos, which has been serving up simple, traditional fare and local wine for over 100 years. Sample some classic Dalmatian dishes such as peka, vegetables and lamb or octopus cooked together in a pan, or grilled squid with olive oil and parsley. End with something sweet such as rožata, a traditional Croatian custard pudding.

What to take back?

Avoid the holiday blues after your weekend in Split by picking up something special to take home with you. Purchase a chic Croatian cravat and return feeling stylishly Mediterranean, or take back some local olive oil and try out Croatian cooking for yourself. Dried lavender and rakija, a Slavic spirit prevalent in Croatia, are also popular souvenirs.