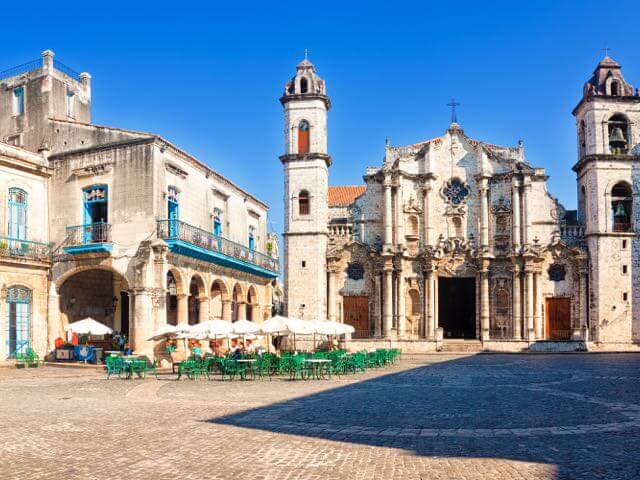 Cuba's capital is a city with several sides. Deservedly celebrated the world over as a centre for dramatic dancing, Havana boasts some of the world's best live music and dance performances. It's also a major port city and the centre of the country's Communist government. Havana's Old Town is so inspirational that it has become one of the most recognisable postcard scenes in the world. The intriguing personalities of this frenzied yet irresistible city are warmed by the area's tropical climate, making Havana a destination worth venturing to. With Havana's multiple international airports, flights are pretty effortless.

What is important to know before visiting Havana?

UK nationals will likely need to apply for a visa before city breaks in Havana. The UK is five hours ahead of Cuba, meaning your outbound flight to Havana could be tiring. However, the city's festive spirit is likely to give you a second wind. Two currencies circulate – the Cuban and the convertible peso. Make sure to figure out which peso applies before bartering! Whereas the local currency is often used for smaller items, items purchased from Havana flights and hotels are more likely to priced in convertible pesos. Tipping around 10% is normal.

Cuba's subtropical climate lets you don your swimwear and summer wardrobe. Whereas it stays hot throughout most of the year, it can get chilly in the evenings, so don't forget some warmer garb as well. Direct flights from London and Manchester to Havana make getting to this exciting destination easy.

When is the best time to visit Havana?

From December through May, you'll enjoy warm, dry weather in Havana. The wet season starts in June, and August can bring hurricanes. Other magical moments in Havana's calendar include

What is there to do in Havana?

Cuba's got rhythm, and nowhere more so than in Havana. From salsa to son (a fusion of Spanish and African sounds) to son montuno (country music), music is central to Cuban culture. You'll have no problem finding a dance partner at Casa de la Música, one of the city's most renowned dance clubs. It attracts all the biggest names, and you'll pay next to nothing for the privilege of grooving to their salsa beats.

Stroll along Paseo del Prado, an off-piste alternative to the much more famous, sea-hugging Malecón. The avenue, which is arguably better for people watching, links the Malecón with the centre. Sunset illuminates the surrounding gem-coloured buildings, making the spectacular vista all the more entrancing. Soul flows through these streets, conducted by the fiery flamenco dancers that frequent them and the quenching mojitos they use to cool off. If Cuban cigars are your bag, this is the place to enjoy one.

What is there to see in Havana?

One of Havana's most appealing aspects is its proximity to the sea. White sand beaches and Cuba's famous sunshine await you in glittering Santa Maria, which lies southeast of the city centre. Back in town, a youthful though well-heeled crowd lazes at the popular Macumba Habana, an outdoor pool that hosts music and dancing in the evenings. The impressive Castillo de los Tres Santos Reyes Magnos del Morro, emblematic of the city, is a must on package holidays in Havana. Three-metre thick walls encircle the vaunting Renaissance-style castle and its famous lighthouse.

Another hard-to-miss gem is Plaza Vieja, where Baroque design bumps up against Art Nouveau. Have a peek at the remarkable stained glass on the western edge. A weekend in Havana would be incomplete without witnessing the majestic interior of Museo de la Revolución, designed by Tiffany of New York. Check out the Presidential Palace, which was constructed in the twenties and served as the seat for numerous Cuban presidents, and don't miss the sparkling Salon de los Espejos (Hall of Mirrors), which echoes the interior of Versailles. Further afield, look out for Cuba's national bird, the tocororo, in the orchid gardens of Soroa.

What is there to eat in Havana?

After grabbing your flight to and hotel in Havana, it's time to sink your teeth into the city's exceptional cuisine. City breaks in Havana call for revelry, so once you arrive in the city, it's time to bring out the rum for a refreshing mojito. Should you arrive earlier in the day, grab a treat at the renowned Coppelia ice cream parlour, located opposite the Habana Libre Hotel, another landmark.

Roast pork, spicy sauces and rice are on the menu in most places. Try Il Piccolo for old-style cuisine in atmospheric surroundings, or find your way to Café Laurent for decadent seafood and silver service. La Fontana, reputedly Havana's best restaurant, is appealingly situated off the beaten track. It features aquariums and live jazz performances.

Package holidays in Havana offer the opportunity to hunt for great souvenirs. Whether you're in the market for some of the country's famous cigars, coffee or rum, you'll find plenty of places to source such items.

Browse the tomes in La Plaza de Armas' secondhand book market Wednesday through Saturday, or take a rickshaw or taxi to the market at Almacenes San José, which overlooks the bay. You could also while away part of your Havana weekend in Calle Obispo, a central stretch of the city's old quarter.