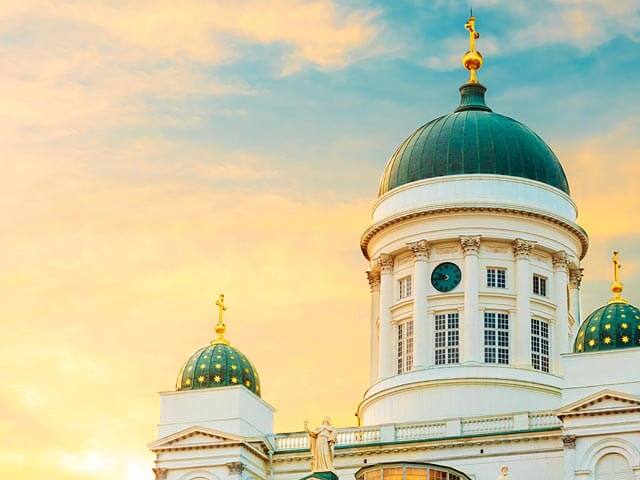 Set on the Gulf of Finland, Helsinki is the country's capital and largest city. Globally praised for its high standard of living, Helsinki has been variously influenced by Sweden and Russia throughout its history. Today this hip, pleasant destination is known for diverse architecture, fun nightlife, and great cuisine. Your weekend in Helsinki can begin right after you step off the plane, with a stop at the beloved hot dog vendor in the Helsinki airport.

What to Know Before Visiting Helsinki

Flights to Helsinki come into the Helsinki-Vantaa Airport, located just outside the city. There are daily flights from many international locations, including from London to Helsinki, and other UK cities like Manchester. As a British national, you will not need a visa, and you can stay in Finland up to three months as a visitor. Finland operates on the Euro.

Helsinki is a mere two hours ahead of the UK. Almost everyone in the city speaks English, but saying 'kiitos' to thank a server or hotel employee will be much appreciated. It should be easy to get around during city breaks in Helsinki, as there is excellent public transportation.

When is the Best Time to Visit Helsinki?

Weather is mild in the summer, with the days generally around 19°C or 20°C. January and February are the coldest months, with daily highs averaging -1°C or -2°C. However, the city doesn't stop for this, so neither should you! Late spring and early fall are quite temperate, making them a great time to come for both the weather and to avoid the rush of summer visitors.

If you love music, you might want to consider package holidays to Helsinki in August, during the popular Flow Festival, which features the best in contemporary music. The Helsinki Samba Carnival in June fills the streets with colourful dancers in a wild celebration of samba dancing. And if you're planning a winter holiday, Independence Day on 6 December fills the city with patriotic celebration and history.

What Is There to Do in Helsinki?

Finnish design is renowned the world over, and you'll find it in abundance during city breaks in Helsinki. The simplest thing to do is head to the aptly-named Design District for plenty of shops, as well as antique stores, bars, and restaurants. For boutique shopping in the historic centre, head to Tori Quarters. Helsinki has many bars, laid back pubs, and night clubs. Kuudes Linja is a favourite party spot for locals and visitors alike. If you plan to go, keep in mind that it doesn't get going until 10pm! Finally, don't pass up the chance to add a traditional Finnish sauna experience to your Helsinki weekend agenda. Two options include Sauna Hermanni and Löyli; the latter is right on the water. For a bit of history on the side, Yrjönkatu Swimming Hall is a pool and sauna dating back to 1928.

After booking a flight and hotel for Helsinki, you may want to take advantage of the 'Hop on, Hop off' bus tour—there are versions that even include part of the tour being conducted by boat. Either way, landmark places to check out during your city break in Helsinki include:

Where To Eat in Helsinki

There are restaurants from many cultures represented here, but if you want your package holidays in Helsinki to include traditional Finnish food, there are several spots to consider. Aino, Ateljé Finne, and Havis should all fit the bill. For a simple lunch, try Bali Hai in the Punavuori District, near the city centre. And if you feel homesick for the British pub atmosphere and a pint, try Tori or Bar 9.

What Souvenirs Should I Buy?

Any of several popular items will help you remember your weekend in Helsinki long after it ends. For home decor, look for a takana, a reversible wall hanging with a double weave. Fazer candies will delight the young and old; the Fazer chocolate is absolutely top-notch. If you took to the sauna, a sauna bucket and ladle will remind you of the experience. And the bold designs of Kalevala jewelry offer a lasting memory of Finnish simplicity and elegance.