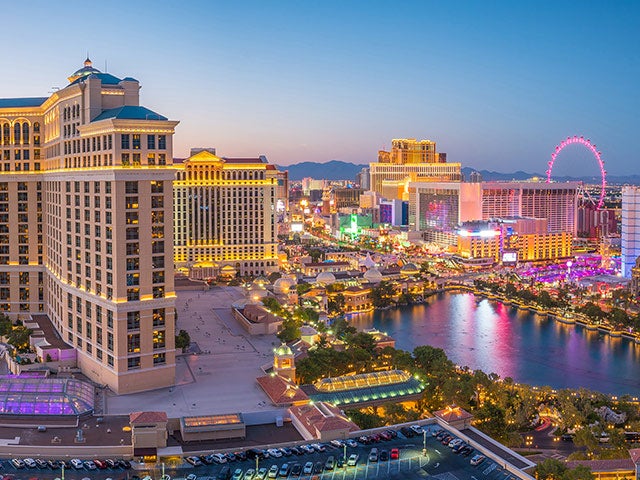 Located in the American Southwest's Mojave Desert, Las Vegas has served as an oasis for fun-seekers since the 1940s. Founded in 1905, the city's evolution toward what it is today began in the 1930s, when the state of Nevada legalized gambling. By the end of World War II, Las Vegas boasted the first of its swanky hotels and casinos, which have only grown increasingly elaborate over the decades.

'The Strip', a 7km stretch of South Las Vegas Boulevard, is where you'll find the hotels and casinos for which the city is so famous. Here you'll also be able to make the most of excellent restaurants, nightly entertainment, crystal-clear pools, and spas. With such diverse offerings, city breaks in Las Vegas can be as relaxing or as non-stop as you choose to make them.

What to Know Before Visiting Las Vegas

The city’s main airport is McCarran International Airport. There are some direct flights from London to Las Vegas, while other flights to Las Vegas will have a short layover. You can also find flights from Manchester to Las Vegas. In addition, you can maximize your time and money with one of numerous package holidays in Las Vegas.

Las Vegas is located in the Pacific Time Zone, and there is an eight-hour time difference between Las Vegas and the UK.

Citizens of the UK must obtain authorisation to enter the United States using a British passport through a visa, a Permanent Resident Card, or most typical, the Visa Waiver Program. You can view more information at gov.uk—it's quite simple to get the details in order before your weekend in Las Vegas!

As is the case throughout the United States, English is the main language spoken here, and the currency is the dollar. Credit cards with chips are increasingly accepted throughout America, but it’s best to exchange some pounds for dollars to have on hand!

When Is the Best Time to Visit Las Vegas?

Many large events are held or celebrated in Las Vegas throughout the year, such as:

What Should I Do in Las Vegas?

Visitors to the city are spoilt for choice, and package holidays in Las Vegas will help you get the most out of your time!

You'll find many unique sites within and just outside the city, well beyond the casino floors.

Feeling especially adventurous? Consider a helicopter tour of the Grand Canyon, one of the most breathtaking sites in the United States and an excellent way to spend part of a weekend in Las Vegas!

Where to Dine Out in Las Vegas?

Las Vegas is home to some of the country’s best restaurants, with options for every budget and palate. Take a culinary trip around the world without ever leaving the Strip:

What to Bring Home From Las Vegas?

One of the city's taglines might be 'What Happens Here, Stays Here', but that hardly means you can’t bring a piece of it home with you. Shot glasses, poker chips, playing cards, and dice are on-theme gifts, of course, while turquoise jewelry is something pretty and native to the American Southwest. Of course, the memories you make are sure to be the best souvenirs from city breaks in Las Vegas!