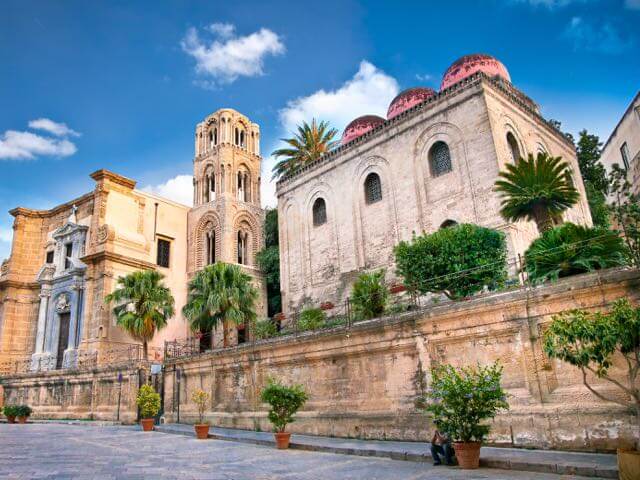 Ancient history brushes shoulders with blissful beach life in Palermo, one of Italy's most stylish city break destinations. Devour mouthwatering Italian street food. Gaze over aquamarine expanses and up at cupolas and glittering Byzantine mosaics. Swooping domes and flying buttresses form a dynamic backdrop to this feisty city, which still oozes ancient grandeur and prestige through every turreted pore.

What to know before visiting Palermo

Palermo is an hour ahead of the United Kingdom, making travelling here especially easy. It's straightforward to organise a flight to and hotel in Palermo. Flights from Manchester to Palermo depart almost as regularly as flights from London to Palermo. Since Italy is within the European Union, euros are the currency. You'll find many places also accept card payments. Happily, the city offers some of the most bargainous street food, museum admission and taxi fares in Europe. You'll also find it easy to move between city and airport via public transport. Meanwhile, Palermo's port is just a ten-minute walk from the centrally located Piazza Politeama.

When is the best time for city breaks in Palermo?

The best time to visit Palermo is undoubtedly in the summer months. Unsurprisingly, July and August see a peak in temperatures and visitor numbers, while September is slightly cooler and far quieter. Enjoy lower prices and splendid weather in the springtime, when food markets shoot up throughout the city.

Santa Rosalia is the city's patron saint, and one of the best times to visit Palermo is during her festival. The most memorable weekends in Palermo might be during this July celebration, which involves fireworks and floats, along with open-air theatre on Mondello Beach. The celebrations are unforgettable. October is a good time to visit as well – there's diving, since the sea's temperature takes time to drop after summer, and you can catch the start of opera season at the Teatro Massimo.

What is there to do in Palermo?

In Palermo, visitors can discover a cultural crossroads. East meets west, and high art meets fried street food. Europe's second-most-spacious opera house, the Teatro Massimo, is also one of the most renowned. There's little more sumptuous activity on weekends in Palermo than a few hours spent in the company of one of its productions.

Wonder at the local colour at the Mercato di Ballarò's evening street market, or the hues of the paintings at the 15th-century Galleria Regionale della Sicilia. Package holidays in Palermo aren't complete without gawping at the skill of Sicily's artists. The gallery's exhibition starts with the Middle Ages and continues right up until the present day.

What to see in Palermo

Without a doubt, Palermo's top attraction is the glittering Cappella Palatina. This thousand-year-old chapel is a marvel of Arabic carvings, vaunting frescoes and gleaming marble floors. This side of the Vatican's famous chapel, it's the closest you'll get to heaven on Earth.

You can also travel back in time at the Palazzo dei Normanni. The foundations of this edifice were laid in the 9th century, when life was a little different. The seat of Sicily's parliament, the building is adorned with fantastic mosaics and also houses its own rather special chapel. Ecclesiastical buildings aside, Quattro Canti, with its four gushing fountains, is perhaps the most impressive square in the city.

Palermo is pizza in the piazza

City breaks in Palermo are about marvelling at ancient art and religious architecture, weeping at the beauty of the Sicilian coastline and refuelling with Palermo's famous street food. Necessity being the mother of invention, it is Palermo's impoverished history that we can thank for swelling the lining of food stalls along its streets and our arteries. Friggitorie (fried food) vendors throng the Vucciria, Ballaro and Capo areas. Here's what to try:

What are the best souvenirs from city breaks in Palermo?

Souvenir-wise, package holidays in Palermo may be best represented through some of the lava stone products that strew the street markets like friggitorie. Active volcanoes in the area have given rise to a unique industry, and even some of Sicily's city streets are paved with the black aftermath of rock that remains after the fire.

Approximately 200km from Palermo sits Caltagirone, one of eight UNESCO-protected towns famous for its pottery. You can find many examples of these bright creations in Palermo, too. However, perhaps the most famous of Palermo's exports are its puppets. You'll find all manner of handcrafted puppetry, not necessarily tied to the famous Mario Puzo novel.