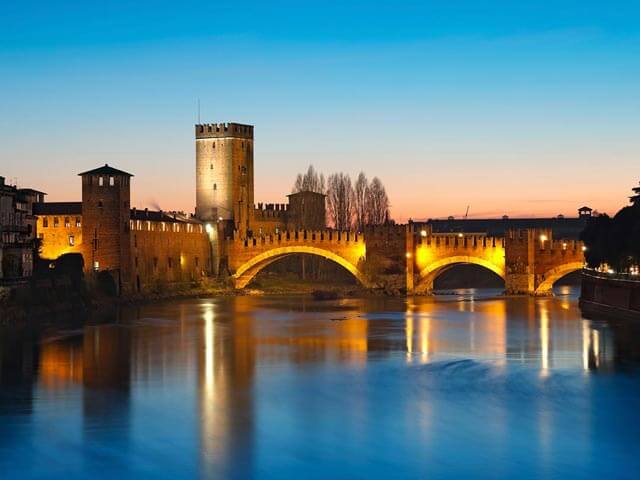 Located in north-east Italy, Verona is a city that attracts gourmands, history enthusiasts, lovers of literature, and anyone in search of a romantic getaway. The architecturally stunning city has existed in some form or another for more than 2,000 years, but it was more firmly established around 400 A.D. due to its location at the intersection of several major roads. Over many tumultuous centuries, Verona was at times under Roman, French, and Austrian rule, until it at last became a part of United Italy in 1886.

Verona’s long and varied history is reflected in its ancient Roman and medieval architecture, which led to its designation as a UNESCO World Heritage Site. A flight and hotel in Verona will let you soak up the city’s rich culture and heritage.

What to Know Before Visiting Verona?

Though Verona is relatively small compared to Italy’s main cities like Rome and Florence, it does have an airport. Verona Airport is 10 km south-west of Verona. There are direct flights from London to Verona that take about two hours. Flights from Manchester to Verona generally require a short layover. There are many package holidays in Verona that will help you book the perfect hotel and flight to Verona. Travelling to Italy is simple with your British passport and a visa is not necessary.

A few other important travel tips to remember: Verona and all of Italy are on Central European Time (CET) and one hour ahead of the UK. Italian is the main language spoken in Verona and throughout Italy, and the currency is the euro.

When Is the Best Time to Visit Verona?

The time of year you visit Verona might depend partly on if you prefer cool or warm weather. There are also numerous events that take place in the city throughout the year which might influence when you’d like to pop over for a weekend in Verona. The Veronese Carnival in February, the Verona Jazz Festival in June, and the Verona Christmas Crib Exhibition are just a few of the popular events the city hosts. Package holidays in Verona are a great way to take in everything the city has to offer!

What Should I Do in Verona?

Verona is brimming with activities, no matter what you fancy. Art and history lovers can explore some of the many museums, such as the Museo di Castelvecchio, a medieval castle with a sizeable art collection. Gastronomes might consider taking a walking food tour or even a cooking class. If you’re looking for a spot of exercise after all that pasta, there are numerous biking tours around the city and the surrounding countryside. There are dozens of ways to pass a lovely weekend in Verona – simply take your pick!

Notable Spots to Visit in Verona

The city is dotted with many sites that shouldn’t be missed during city breaks in Verona, just a few of which include:

Where to Dine Out in Verona?

Restaurants in Verona serve some of the best Italian fare you’ll find in the country. Excellent, made-from-scratch pasta can be found everywhere, as can mouthwatering pizzas. Some of the most highly rated restaurants are Osteria del Bugiardo, Il Cenacolo, L’Orologio, Enoteca Cangrande Giotto, and Antica Bottega del Vino. After lunch or dinner, be sure to indulge in some gelato, a favourite Italian dessert, at Gelateria Patagonia, Amorino, or one of the many other shops that are sprinkled throughout Verona.

What to Bring Home from Verona?

Charming gift shops abound throughout Verona. A heart-shaped lock from Juliet’s house, a bottle of local wine, or a package of handmade pasta are all certain to help you relive city breaks in Verona!