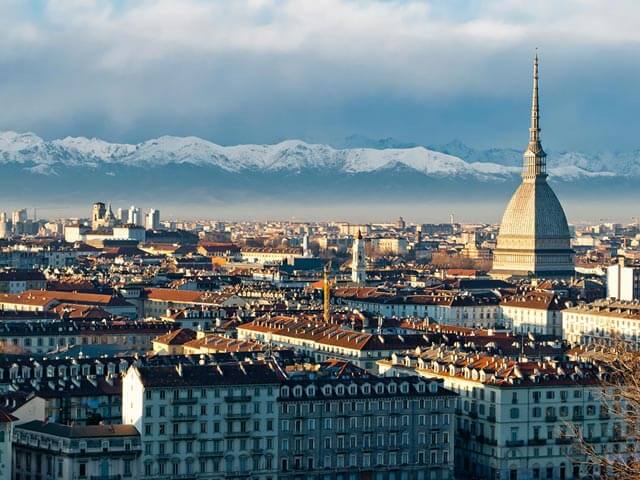 Known locally as Torino, the large city of Turin is situated in northern Italy, close to the French border and in the foothills of the Italian Alps. Turin became the first capital city of a unified Italy in 1861, and is today the capital of the Piedmont region. Package holidays in Turin allow visitors to explore its rich history and culture, and experience the passion of Italian football and the pleasures of northern Italian cuisine.

What to Know Before You Visit Turin?

Italian is the official language, though you'll likely find that many people in the travel industry speak some English. The currency in Italy is the Euro, and Turin is one hour ahead of UK time. Visitors from the UK do not need a visa to spend a weekend in Turin.

When Is the Best Time to Visit Turin?

As the city is located in northern Italy, in the foothills of the Alps, winters can be quite cool and wet, and snow is not uncommon. Winter sports enthusiasts enjoying city breaks in Turin are only a short distance from ski resorts Pian Benot and Vialattea. In the summer, Turin can get hot, with daytime temperatures reaching the high 20s. Spring and fall are typically temperate and pleasant.

If you find yourself in the city in May, you might overlap with the International Book Fair, Italy's biggest book fair. Kappa Futur Festival, an electronic music festival, takes place in July, and Artissima, a prestigious art fair, is held in November.

What Is There to Do In Turin?

Between autumn and spring, you can experience Italy's number one passion: football. The city is home to two teams, Torino and the world-famous Juventus, who play at the Allianz Arena. Here you'll find a museum dedicated to la Vecchia Signora, or the Old Lady, as the team is nicknamed.

After choosing a flight and hotel in Turin, make sure you book a ticket on the Turin Eye, a unique visitor experience which alllows you to soar above the city centre in a tethered hot air balloon. You can enjoy great views across Turin and the distant Alps, all while enjoying a glass of wine and a few snacks. And don't forget your walking shoes: unique to Italian cities, Turin is not only laid out in a grid, but many streets boast covered arcades, making it walkable at any time of year.

What Should You Visit In Turin?

There are a number of museums and palaces to include on a Turin weekend itinerary.

What Must You Eat and Drink In Turin?

Pasta is as popular in Turin as anywhere else in Italy, with local specialities including a very thin type of spagehetti called tajarin, and agnolotti, pasta dumplings stuffed with beef or rabbit. On that note, Turin is also home to some of Italian spirits' most iconic names; during the 18th century the city became home to some of the first factories making and distilling aperitivo on a large scale. Cinzano, Campari, Vermouth, and Martini were all founded in Turin, so why not join the locals and enjoy a glass or two before dinner?

To bring home the best of local meats, cheeses, wines, and spirits, you can easily find them all at the original Eataly emporium. For a local authentic meal in the city centre, try the trattoria Dai Saletta.

What to Bring Back From Turin

Bottles of local aperitivo make a great souvenir from package holidays in Turin, and a great gift for family and friends. The shop at the Juventus museum is also a great place to buy souvenirs, while the painted ceramics from the nearby mountain village of Mondovi are sold in many artisan shops in Turin.