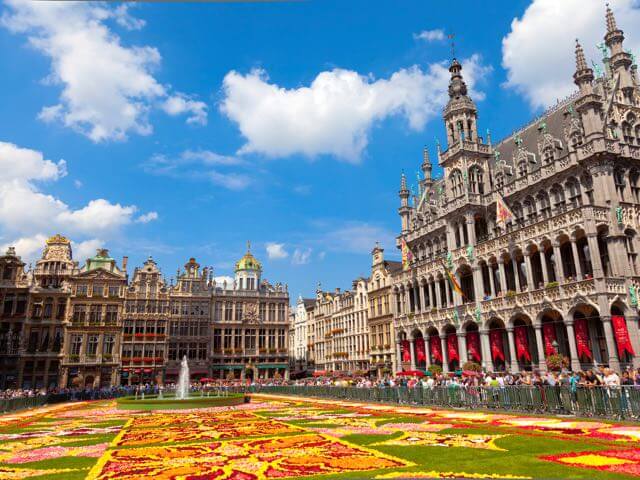 A city with an enduring legacy

Package holidays to Brussels promise a fascinating and idyllic trip in the much-loved capital city of Belgium, a small but densely popularly country in western Europe bordered by France, the Netherlands, Germany and Luxembourg. Brussels, very much an international city, is home to a variety of communities.

Brussels has a long history of importance and has been a centre for trade and administration since the Middle Ages. The city has experienced turbulent times too, notably during WWII, when it was occupied by Germany. Brussels shook off the shackles of occupation during the post-war period when it helped conceive the European Union.

What to know before you go to Brussels?

Your flight to Brussels will take you to the city’s main international airport, Zaventem (BRU), one of Europe’s busiest, or the city’s southern airport, Charleroi (CRL). Both offer easily accessible routes to the city centre. Flights from London to Brussels are served by the main airport and take just 75 minutes, while flights from Manchester head to Charleroi and usually last just under 90 minutes.

Belgium uses the euro and is just one hour ahead of the UK, making a spontaneous weekend to Brussels very attractive indeed. British citizens can travel freely to Brussels without the need for a visa. They will discover that Brussels has a diverse cultural makeup with an estimated 104 languages spoken throughout the city. The city is officially bilingual (French and Dutch), but Arabic and English are widely spoken too.

What is the climate in Brussels?

The climate in Brussels is not dissimilar to the UK's. Temperatures peak in July and August, hitting 18°C on average. June is also typically warm, although can also be rainy. The winter months are moderately cold, with temperatures dropping to 3–5°C.

A flight to and hotel in Brussels promise the opportunity to discover, savour and enjoy this special city. If knowing more about the city’s many different cultures interests you, don’t miss the biennial Zinneke Parade in May, which aims to bring different communities together in a celebration of colour, music and joy. Perhaps you’d prefer a winter weekend in Brussels? If so, don’t miss Brussels's exquisite Christmas Market.

Beauty on every corner

Package holidays to Brussels offer the scope for a tranquil few days or an action-packed weekend – the choice is yours. For those looking for lovely sights and relaxation, city breaks to Brussels provide an excellent opportunity to do some walking. Stroll past distinctive and intriguing architecture, such the pretty 19th-century greenhouse, Le Botanique, or the art-nouveau Old England Building, a former department store built in 1899.

For those feeling adventurous, Bruges, a medieval town distinguished by flowing canals and cobbled streets, is less than an hour’s train ride from Brussels and offers the perfect day trip.

What else to do in Brussels?

It wouldn’t be advisable to try to stick to your diet on city breaks in Brussels. One of the city’s trademarks is its indulgent gastronomy, with popular treats including sizzling hot French fries and mayo, and of course, waffles – a sugary, crunchy bite but soft on the inside, these are just divine.

Be sure to try local Flanders fare such as carbonnade flamande, a succulent beef casserole, or waterzooi, a creamy fish stew. Seafood is widely available and affordable in Brussels. Check out Noordzee, a fish stall set in a square, where you can devour juicy oysters and salty razor clams.

Something to take back from Brussels?

Avoid post-holiday blues by picking up some Belgian treasures to take home following your flight to and hotel in Brussels. Here’s a handy list of souvenirs to keep an eye out for: