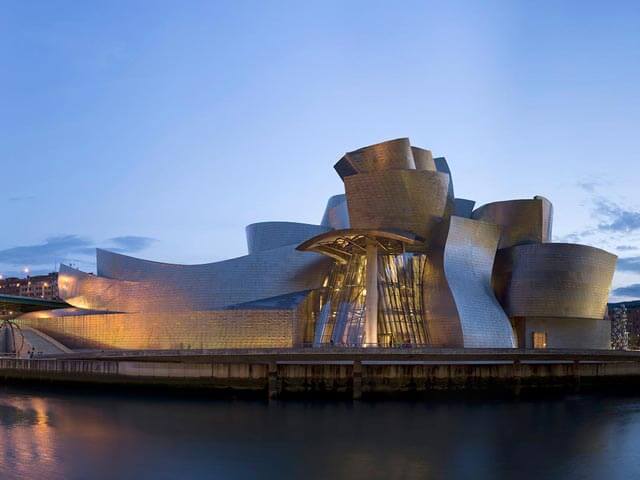 Situated in northeast Spain, at the foot of the Pyrenees and just south of the Gulf of Biscay, Bilbao is nestled between one of the most stunning mountain ranges in continental Europe and some of its best surfing spots. Add to that its unique Basque heritage and tasty cuisine, and you'll see why Bilbo, as it is affectionately called by the locals, makes an ideal destination for travellers who love diversity. City breaks in Bilbao are especially recommended for culture vultures and gastronomes.

What to know before you go

The most important thing to know is that the Basque people think of themselves first and foremost as Basques and then, perhaps, as Spaniards. As Euskara (the Basque language) and Spanish are the official languages of the region, you'll see bilingual signs pretty much everywhere. If you really want to win the locals over, learn some simple words and phrases, such as Kaixo (“Hello”) beforehand. Prepare ahead of time, and you'll quickly make new friends easily during your weekend in Bilbao.

The city has only one airport – Bilbao Airport (BIO). All flights to Bilbao, whether from London or Manchester, will arrive here.

When is the best time to travel to Bilbao?

This Basque city is a year-round travel destination, despite winters being a bit rainier than summers. As the city has a lot of indoor attractions to offer, the quieter winter season is ideal for travellers interested in flight and hotel city breaks in Bilbao. The summers are pleasantly warm, and package holidays in Bilbao during this time are ideal for visitors who enjoy the outdoors, the beach, the mountains or simply sitting in one of the many picturesque squares watching the world go by.

What can you do in Bilbao?

The Basques love music – join them at an open-air summer concert in Parque El Arenal. Another big event is Aste Nagusia (“The Big Week”), which starts in the second half of August. The celebration comprises nine days of street music and theatre, great food and drinks and fireworks every evening.

It's perfectly possible to explore Bilbao on foot. Walk through the maze of its Casco Viejo (Old Town), alongside the sedate river towards the coast or through its many green parks. For great views, climb up to Parque Etxebarria or take the Artxanda Funicular.

Best things to see in Bilbao

The world-famous Guggenheim Museum is Bilbao's best-known attraction – make sure to book your ticket in advance, or as part of your package holiday, to avoid queues. Also, take the time to walk around this stunning building and don't miss the “flower puppy”! The Basque Museum is a great place to learn more about the history of the region, and the Maritime Museum shows locals' deep connection with the sea. While one weekend in Bilbao is hardly enough time to see all that the city has to offer, it will give you a good start and appetite for more.

A well-kept secret of the city are the many gastronomic societies, called Txokos. Originally men-only cooking and dining clubs, several now welcome small groups of travellers of all genders. Txokos have been instrumental in keeping traditional Basque cuisine alive. Some dishes you simply have to try, either with a Txoko or at one of Bilbao's many award-winning restaurants:

To wash athese delicacies down, try a glass of Txakoli, a crisp white wine.

What to bring back from Bilbao

The best place to find unique souvenirs is the Plaza del Dos de Mayo flea market, which takes place every first Saturday of the month. Another great place to shop is the seven streets that form the Old Town – pick up Basque delicacies such as cheese and Txakoli. Alternatively, visit the oldest hat shop in town, Sombreros Gorostiaga, or Espacio Aerre, where local artists sell their works. You'll also see plenty of jewellery shops selling items decorated with typical Basque symbols. The city's shops are full of tangible memories you can bring back home to remember package holidays in Bilbao.