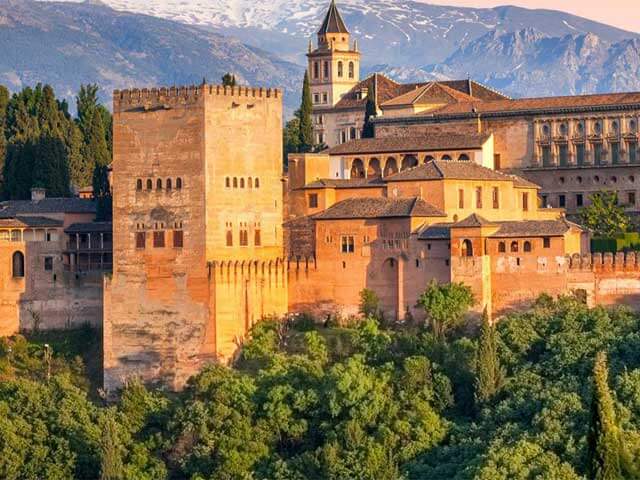 While the stunning Alhambra, the beautifully preserved Moorish palace, is undoubtedly Granada's main attraction, this Andalusian city has so much more to offer. Explore the medieval cave dwellings in Sacromonte, wander the winding streets of its Old Town and enjoy a glass of sherry served with free tapas. Several festivals throughout the year and an endless number of stunning churches and museums will keep your eyes busy on weekends in Granada.

Remember to adjust your watch before arriving for your weekend in Granada, as Spain is one hour ahead of the UK. While Spanish is the official language, locals tend to speak Andaluz, a regional dialect with many Arabic loanwords and a tendency to clip the ends of words. Thankfully, UK citizens won't need a visa to spend time here.

There is a number of direct flights from the UK to Federico García Lorca Granada Airport (GRX), including from London and Manchester. You might also want to check out flights to Málaga, which could be the better option if you travel during the low season. To get from Málaga to your final destination, take the Alsa bus, which runs several times per day from Málaga airport (AGP) to Granada.

When is the best time to travel to Granada?

Granada has a dry climate with hot summers and mild winters. The best travel time is spring, when temperatures are comfortably warm and everything blooms. Autumn and winter are also great times, as attractions such as the Alhambra tend to be less busy. Granada is home to many festivals and events; if you travel during one of the following periods, make sure to reserve your flight and hotel in Granada well in advance:

What to do in Granada

One of the biggest joys of Granada city breaks is that the area is so easily explorable by foot. Make sure to wear comfortable shoes, as the city is hilly and the best treasures are often hidden in the narrow cobblestone streets. Exciting areas to explore are:

What to visit in Granada

Make sure to order your ticket to the Alhambra well in advance, either online or as part of your package holidays in Granada, as the number of visitors allowed every day is restricted. Also, pay attention to when your allocated timeslot for the Palacios Nazaries is, and plan your visit around it.

The Cartuja Monastery, in the northern part of the city, is a superb example of Baroque architecture. The cloister gardens are a place of quiet contemplation, while the church itself is full of stunning artwork.

The Parque de las Ciencias in the southern part is a great place for the whole family. Different exhibitions show the importance of science and technology brought by the Arabs to Andalusia.

What to eat in Granada

Apart from tapas, which are typically served for free with drinks, there are many local specialities that are worth trying. Granada's cuisine is a delicious mix of Spanish and Arabic influences. Some dishes you can enjoy during city breaks in Granada:

What can you bring home from Granada?

A few suggestions of what to bring home after package holidays in Granada: