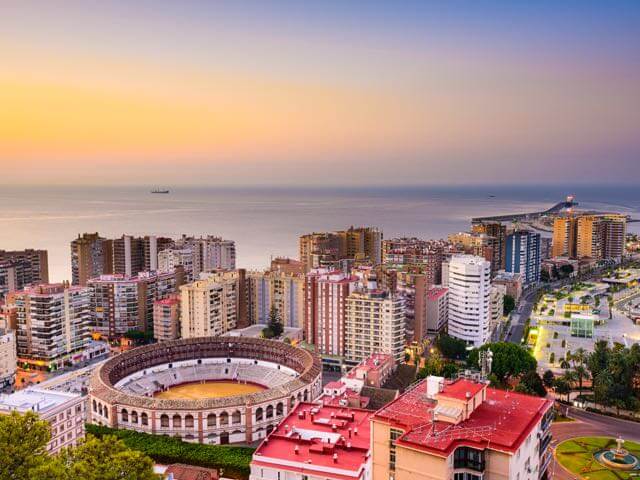 Malaga is the largest town on Spain's Costa del Sol, the southern Mediterranean coastline home to many of the country's most popular resorts. The historic port is a city of contrasts; as you will see on package holidays in Malaga, the beach front is dominated by high-rise hotels and apartments, but head into the streets of the old town, and you discover historic homes and fortresses, and hidden cultural gems.

What to Know Before Visiting Malaga

Malaga, like all of Spain, uses the Euro, though if you are planning a day trip to Gibraltar, the British Overseas Territory 60 miles along the coast, make sure you've packed some British pounds! The time in Malaga is one hour ahead of the UK, and while Spanish is the official language, many people working in the travel industry speak English.

The airport at Malaga is the main arrival point for all of Costa de Sol's busiest resorts. Visitors on package holidays in Malaga may have a transfer to their accommodation included in their deal, but independent travellers can take advantage of the local train service which takes holidaymakers into the Malaga city centre. Flights to Malaga depart from airports across the UK, including several flights from Manchester and flights from London airports Heathrow, Gatwick, Luton, Stansted, and London City.

When Is It Best to Visit Malaga?

As the name Costa del Sol suggests, the area around Malaga is blessed with a sunny, warm climate throughout the year. Choose city breaks in Malaga in the winter months and you can still enjoy temperatures up to 20°C, more than warm enough to soak up some sun on the beach (although the sea will likely be too chilly for a dip). In the summer, Malaga does become very busy with visitors from around Europe, enjoying the high temperatures and almost guaranteed sunshine.

What Is There to Do In Malaga?

Set some time aside for rest and relaxation on the beach during your weekend in Malaga. The Playa de la Caleta is one of the most popular beaches, and is home to volleyball courts and even an outdoor gym, while the Playa de El Palo is the place to go if you want to end your day with a good meal and a few drinks. The restaurants and bars on the nearby Paseo Maritimo are lively throughout the year.

What Should I Visit In Malaga?

Ideally you'll have planned more than just beach time when researching your flight and hotel for Malaga, as there is much more to explore.

What to Eat In Malaga

'Gazpachuelo Malagueño'is a traditional Malaga fish soup which was first made by peasants in the working class area of El Palo. Today, shrimp, langoustines, and even clams are added, and it is enjoyed by everyone. Fried fish, or 'Fritura Malagueña', is a very popular main meal or snack, especially in the bars and restaurants along the city's long promenade. If you prefer meat dishes on city breaks in Malaga, try ordering the local speciality 'Rabo de Toro', diced bull's tail served with a red wine sauce.

What to Bring Back From Malaga

Shops here sell all the usual Spanish mementos, including castanets and flamenco dancing dolls, but if you want to bring back something a little more unusual, Malaga is a great place to shop for unique souvenirs. The area around Malaga, Andalucia, is well known for its colourful ceramics, many of which are still hand-made and hand-painted. Local olive oil and Andalucian wines always go down well as gifts for family and friends, while decorative painted fans allow you to take home a traditional piece of Spanish memorabilia.