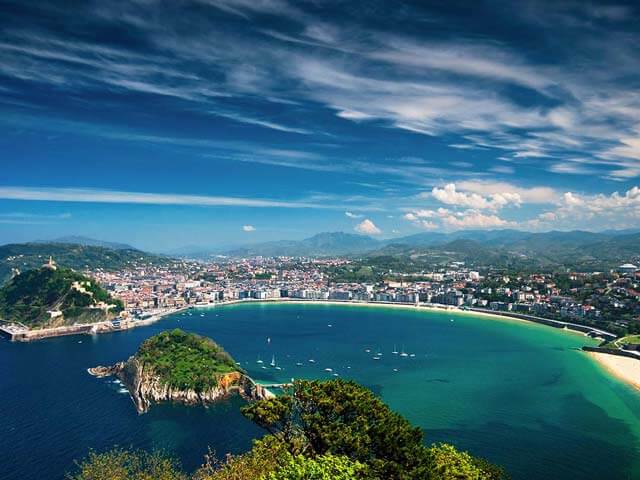 Located on Spain's northern coastline, in the semi-autonomous region of the Basque country and only 12 miles from the French border, San Sebastian has been a popular destination in Spain for decades. Known as Donostia in the local Basque language, the city has beautiful unspoilt beaches that are often a highlight of package holidays in San Sebastian.

What to know before visiting San Sebastian?

Spanish is widely spoken throughout the Basque Country, though many people working in the travel industry will also speak English. The local Basque language is also widely spoken throughout the region; road signs are bilingual, and you can even buy a Basque language newspaper, Berria, on your weekend in San Sebastian as an unusual souvenir! The currency is the euro, and San Sebastian is one hour ahead of the UK.

San Sebastian Airport (EAS) is actually located in the nearby town of Irun, right on the French border. For city breaks in San Sebastian, there are many flights from the UK, including flights from Manchester and various London airports. A shuttle bus travels from the airport to the centre of San Sebastian.

When is the best time to visit San Sebastian?

Temperatures during the summer months are pleasantly warm, and there is enough sunshine to make the area's beaches enjoyable. During the winter, however, the area can be chilly and wet, with average temperatures of just 5°C and an average of 13 days of rain per month between October and April.

January, however, is a lively time for a weekend in San Sebastian, as it's when the feast of San Sebastian is celebrated. Known as La Tamborrada, the event features locals dressed in historical costumes taking part in parades and traditional music performances. Mid-August sees the city celebrate Aste Nagusia (or Semana Grande) with an international fireworks festival, while Basque Week, at the start of September, is a celebration of the culture, art and food. It's also a perfect time for a flight to and hotel in San Sebastian.

What to do in San Sebastian

San Sebastian's beaches are popular with locals and visitors alike during the warm summer months. Even if your San Sebastian package holidays are during the cooler spring, autumn or winter months, you can still enjoy a stroll along the beautiful coastline. La Concha Beach is the most developed, with sunbeds for hire and bars and restaurants.

Ondaretta is the perfect beach for surfers and windsurfers who want to experience the waves in the Bay of Biscay. Alternatively, take a summer boat trip out to Isla de Santa Clara in the bay and enjoy the tiny island's unspoilt beaches. Walk to the top of Monte Urgull, which dominates the city, and enjoy the panoramic views along the coast.

What to visit in San Sebastian

Plaza de la Constitución is the heart of the Old Town, a colourful square bordered by lively bars and restaurants. Nearby, you can visit San Sebastian's two oldest churches: San Vicente, a Gothic structure dating from the 16th century, and the more ornate Basilica de Santa Maria, built in the middle of the 18th century.

On your weekend in San Sebastian, visit the 12th-century Castillo de la Mota, a defensive fortress atop Monte Urgell and now the location of the city's Casa de la Historia museum. Take a stroll past the English Cemetery on the north side of Monte Urgull, where the many English who made their home in the area are buried. After a stroll along the promenade, spend a few hours at San Sebastian's 100-year-old aquarium, recently renovated, which includes a 360° tunnel suspended inside a shark tank!

What should you eat in San Sebastian?

Basque cuisine is dominated by seafood, though there are a plethora of tastes to experience during your holiday:

A txapela – a traditional Basque beret – makes a great souvenir of city breaks in San Sebastian, as do Basque flags or gifts emblazoned with the colourful banner. Bottles of txakoli are a great gift to take home for friends and family.