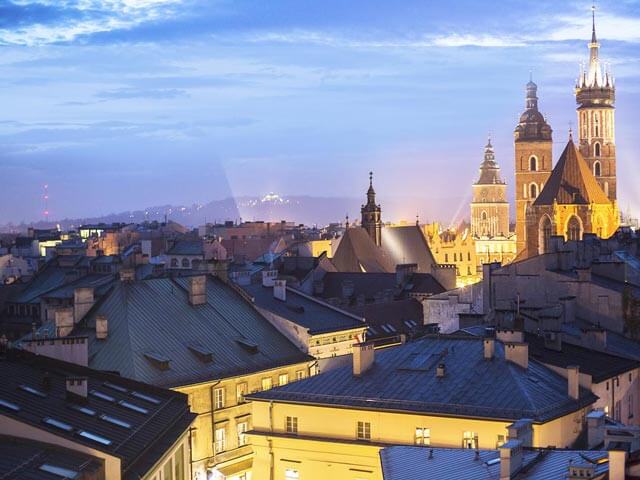 A jewel in Eastern Europe

Krakow, the second-largest city in Poland, is at least as popular and remarkable as its big brother, Warsaw. As the city is one of the oldest and most interesting in this enchanting country, it's little wonder that the number of visitors flocking to Krakow grows each year. That said, the city has kept a firm grip on its charm.

A stronghold of Judaism and intellectualism, Krakow became a victim of Nazi rule when it was invaded by Germany in 1939. This invasion resulted in a Jewish ghetto on the southern banks of the Vistula River and the terrifying nearby concentration camps of Auschwitz and P?aszów. Despite its terrible suffering, Krakow has risen from the ashes of its sad past, restoring itself into a dynamic city that remembers the past but looks to the future.

Tips before you fly to Krakow

Your weekend in Krakow will begin after a flight to John Paul II International Airport (KRK), from where trains will transport you to the city centre in under 20 minutes. Direct flights from London take just over two hours, and there are also quick and direct options from Manchester. British citizens won't need a visa to travel to Poland, where the time is just one hour ahead of the UK's. While Polish is the local language, English is widely spoken. Note that Poland doesn't use the euro, having opted to keep its native z?oty.

When to visit Krakow?

Package holidays in Krakow are popular year round. Outdoorsy types would be wise to visit between May and September, when temperatures are warm until dusk. December through February, sub-zero temperatures are common, though city breaks in Krakow at this time are popular. The city is, after all, known for its outstanding architecture. It's especially stunning in the snow, juxtaposed with the scarlet red and forest green of Krakow’s traditional Christmas market.

All city breaks to Krakow promise something special. In early November, the city celebrates Poland’s All Saints’ Day and All Souls’ Day, when locals pay tribute to the dead. Though this may sound like a sombre occasion, experiencing the city’s cemeteries alight with the eerie glow of incense and candlelight is truly magical. Those with a sweet tooth will be tempted to secure a flight to and hotel in Krakow for the end of Lent so that they can sample local treats such as p?czki and faworki. Budding photographers should head to the city in May to immerse themselves in Poland’s unique visual arts scene during Krakow Photomonth.

As Poland’s historical and cultural epicentre, Krakow is a place for learning. Auschwitz-Birkenau is a painful experience but is essential for anyone interested in understanding Poland’s difficult history. The journey there, which is possible by public bus, lasts just over 90 minutes. Closer to town, Schindler’s Factory offers an explorative look into Krakow's pre- and post-WWII past.

Krakow’s secret gems also make it the perfect alternative summer destination. When you’ve exhausted the city's impressive repertoire of museums, pop into Lucky Bike on Szewska. Pedal past Krakow’s Jewish quarter in the direction of the ruins of the former P?aszów concentration camp and reflect on the city’s poignant past. Relieve your achy legs with a dip in the tranquil waters of Zakrzówek, a 40-minute walk from the centre of Krakow, where locals swim and sunbathe surrounded by the extraordinary vistas of this former quarry turned diving spot.

What else to do?

Complete your weekend in Krakow by ticking off some of these attractions:

One guaranteed highlight of all package holidays in Krakow is the food. Start your day with a hearty breakfast of local kielbasa sausage. If you’re craving something sweet by mid-morning, indulge in Polish sernik (cheesecake). After a day of exploring, feed your deserving stomachs with a Polish feast from a traditional milk bar, such as Krakus on Limanowskiego. If you’re after something a little more high end, the pierogi and trout at Pod Wawelem are unbeatable.

If your flight to and hotel in Krakow haven’t left you with enough memories, take a little bit of this fairytale city home with you with some of the following: