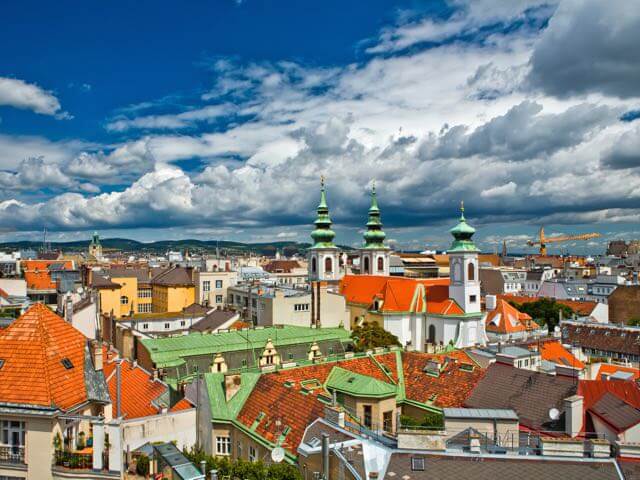 The city of Vienna

Vienna, with a population of just under two million people, is the capital and largest city of Austria. It lies in the northeastern region of the country, along the Danube River. Settled around 500 BC, Vienna was once a key Roman Empire outpost known as Vindobona, and the thriving centre of the Austro-Hungarian Empire.

Sometimes referred to as the 'City of Music' due to its rich musical tradition and Austria being home to the likes of Strauss and Mozart, Vienna is an all-around culture-lovers' paradise. The city is blessed with spectacular museums, grandiose palaces, manicured parks and gardens, concert halls, opera halls, and world-class theatres. Its flavorful Central European dishes, cakes and pastries are second to none, and this marvellous destination will surely have you counting the days until your next visit.

Before your trip to Vienna: What you need to know

Your flight to Vienna will bring you to the Austrian capital's sole major airport, Vienna International. It's in the town of Schwechat, just a 16km trip to the city by taxi or public transport, such as the City Airport Train (CAT) or bus. The CAT departs the airport to central Vienna every 30 minutes and costs about 11 euros per person (free for children under 14).

Austria uses Central European Time (CET), which is one hour later than UK time (GMT). British citizens do not require a visa for entry. It's always a good idea to have a bit of cash (euros) on hand for little odds and ends upon arrival. German is the national language of Austria.

City breaks in Vienna, which boasts a continental and temperate climate, are alluring year round. July is the hottest summer month, and January the coldest winter month. Although winters can be downright chilly, the city proper doesn't usually see a huge amount of snow. Whether you opt for a flight from London to Vienna or from Manchester to Vienna, the best time for package holidays in Vienna is any time that most comfortably suits your schedule and interests.

Spring and autumn bring generally pleasant and moderate temperatures, great for shopping on Mariahilferstrasse or strolling about the inner city to take in the architectural wonders of the Ringstrasse. On a winter weekend in Vienna, look forward to a romantic or family fiacre ride amid snowflakes in the Old Town, Christmas markets, ice skating or the world-renowned Vienna Philharmonic's New Year's concert. Summer, of course, beckons with the city's many outdoor cafés, ice cream and resplendent parks such as the Stadtpark or Volksgarten.

What to do in Vienna?

Your flight and hotel Vienna combination offers the perfect opportunity to explore and savour this Central European cultural wonder. An appealing weekend in Vienna might include any of the following:

What places to visit in Vienna

Package holidays in Vienna put you at the doorstep to an almost endless variety of attractions. Highly memorable city breaks in Vienna might include visits to the following:

Austria's cuisine derives from a long tradition and delicious fusion of German, Czech, Hungarian and other Central European recipes. Similarly, the country has a storied history of tantalizing coffees, dating back to its Turkish influence and evidenced by the plethora of cafés dotting Vienna. Whether you decide on an afternoon tea or coffee with cake in Café Central, a quick würstel (sausage) and beer at any streetside sausage stand, or classic wiener schnitzel at a cosy restaurant, Vienna has something mouthwatering for any occasion. You can't go wrong trying any of the following delectables:

What to bring from Vienna?

Bring home some wonderful souvenirs or sweet treats. Pick up some of Vienna's yummy specialty wafers, manner schnitten, or the finger-licking chocolate and marzipan confectionaries, Mozartkugeln. Another good choice might be a nice bottle of Austrian wine such as a Grüner Veltliner or Riesling. You'll have no difficulty finding a pleasing art book by the renowned Austrian artist, Gustav Klimt, a cute little Vienna monument snow globe or a city-themed pen and pencil set on a jaunt around Mariahilferstrasse or Kaertnerstrasse.