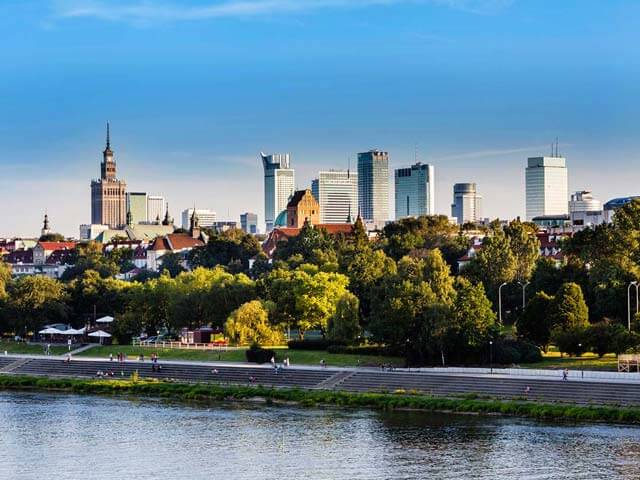 Warsaw, the capital of Poland since 1596, boasts a historic centre that has been designated a UNESCO World Heritage Site. The city also has a tragic recent history, as it was occupied by the Nazis from the beginning of World War II. Warsaw is located in eastern Poland, about 120 miles from the border with Belarus.

What to know before visiting Warsaw?

Thanks to the increasing number of Poles making their home in the UK, British citizens planning package holidays in Warsaw have plenty of options when it comes to flights from the UK to Warsaw. Flights from London to Warsaw depart from Heathrow, Luton and Stansted, while there are departures from regional airports across the country, including Manchester. Warsaw Chopin Airport (WAW), named after locally born classical composer, is located south of the city and is connected to the historic centre by a direct rail link and local bus services.

UK visitors likely won't need a visa for city breaks in Warsaw, and the currency in Poland is the z?oty. Polish is the main language, but many people working in hotels and restaurants will speak at least a little English. Warsaw is one hour ahead of the UK.

When is the best time to visit Warsaw?

The climate in Warsaw changes dramatically between summer and winter. Summers are mild and sunny, with temperatures reaching the mid-20s, while winter temperatures often slip well below freezing. Ice and snow are a common sight in the city throughout the winter months, which is worth bearing in mind when booking Warsaw package holidays during this time.

What to do on Warsaw city breaks

The best way to get to know this fascinating city is to spend some time just walking around the winding streets of its Old Town, simply stopping whenever you spot something of interest. Another good way to get your bearings is to take a boat trip on the Vistula River. During the summer months, there are temporary artificial beaches on the river, which are worth checking out if you want to spend some time relaxing on your weekend in Warsaw.

Places to visit in Warsaw

City breaks in Warsaw are heavenly for history buffs. Start with the Old Town, where many of the buildings had to be rebuilt after World War II. Some other must-see sites:

What to eat in Warsaw

Make sure you try some of the local pierogi, savoury or sweet dumplings that can be eaten as a main meal or snack. They come with fillings ranging from meat and cabbage to various fruits. Bigos and borscht are warming and filling meals, ideal for a winter weekend in Warsaw. Bigos is a hearty stew made from cabbage and meat, while borscht is a soup made from meat stock and beetroot. Vodka is just as popular in Poland as it is in Russia, while craft beer bars are becoming increasingly popular among Warsaw locals and visitors alike.

What can you bring home from Warsaw?

Whereas Polish vodka is a standard Warsaw souvenir, the city's shops have much more to offer than alcohol! If you find yourself inspired by the Warsaw Uprising Museum, buy an anchor pin badge, the symbol of the Polish resistance during the war, or explore secondhand shops and flea markets to find retro items from Poland's Communist past. Jewellery made with Baltic amber is also sold in specialist shops in Warsaw – make sure to get a certificate of authenticity.