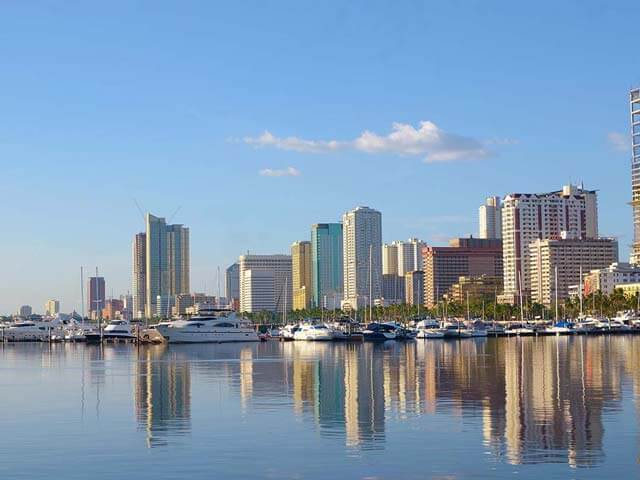 Introducing Manila, capital of the Philippines

The capital of the Philippines, Manila serves a chief business, transportation, education, economic and political hub. Formerly named Maynilad, deriving its name from a nilad plant, a type of mangrove found all over Southeast Asia. The city, once known as the Pearl of the Orient prior to its destruction in World War II, is located on the island of Luzon and has been the centre of the country's growing economy for over four centuries.

Manila is a blend of modernity and history. Towering skyscrapers fill the business districts of Makati and Ortigas, and the famous walled city of Intramuros, a relic of Spanish colonisation, remains a spectacular site of the Philippine's rich historical past.

What To Know Before Visiting Manila?

The Ninoy Aquino International Airport (NAIA) is the only airport that caters to both international and domestic flights to Manila. The currency is in Philippine pesos (PHP), and Manila is ahead of the UK by eight hours. It's helpful to research local flight and hotel deals in Manila ahead of time as you check flights from London to Manila, or from Manchester to Manila.

When you're planning to visit the country, there is no need to acquire a visa, and you can enjoy a visa-free entry to the country for up to 30 days. Tagalog is the official language, but many Filipinos predominantly speaks English and are bilingual. Previously an American colony, western culture is evident in the Filipino lifestyle to this day.

When Is The Best Time To Visit Manila?

Overall, the Philippines has a tropical climate. Thus, the average temperature of Manila reaches 30°C during the most humid months of summer. If you want to stay clear of the country's hottest months, the best time to visit is from September to December. It is advisable to secure your round-trip flight and hotel in Manila early to avoid last-minute disappointments.

What To Do In Manila?

For some, the central Metro Manila is used as a stopover for travellers who want to explore the more beautiful parts of the Philippines, but there is more in this bustling city than meets the eye – it's all about finding the beauty amidst the chaos. To travel like a local for the weekend around Manila, ride the Philippine jeepney. These recycled US military jeeps were initially used during the Second World War and are known for their vibrant exteriors, and are usually packed with passengers during the weekend.

Spend your weekend in Manila shopping as you head over to Divisoria or Greenhills to score some cheap deals. They offer thrift stores, night markets and bazaars. If bargain hunting is not to your fancy, you can head over to SM Mall of Asia in Pasay or Greenbelt Mall in Makati. To cap off the night, have a taste of the local beer, such as San Miguel or Red Horse. You can also check favourite Filipino craft beer spots such as Alamat Filipino Pub + Deli in Poblacion and The Brewery at the Palace at Bonifacio Global City.

What Places To Visit In Manila?

On city breaks in Manila you should explore the walled city of Intramuros. The architecture is stunning, as is the city's flavourful culture. Here you have the option to ride a kalesa or a horse-drawn carriage and soak in the sights of Fort Santiago, Manila Cathedral, and Casa Manila. There are numerous package holidays Manila has to offer for relatively inexpensive deals. Additionally, immerse yourself in the Filipino culture by checking out local museums such as the National Museum, Metropolitan Museum and the newly opened National Museum of Natural History.

What To Eat In Manila?

There are a number of great Filipino speciality restaurants that have sprung up around the metro over the last few years; from heirloom recipe dishes have been passed down through generations to modern fusion restaurants. Check out Crisostomo for Filipino-Hispano dishes such as the kare-kare and crispy pata. If you wanted to taste old classics such as the adobo and paella negra, head over to Pia Y Domaso in Greenbelt. Furthermore, sample inexpensive Filipino street food sold by vendors such as:

What To Bring Home From Manila?

To have one of the most unforgettable city breaks in Manila, drop by local markets and souvenir shops and bring home goodies for your friends and loved ones. Buy local Filipino sweets like yema, polvoron and pastillas de leche. You can also buy beautiful local fabrics made out of pina, which is essentially pineapple fibres. Locals use these gorgeous, flowing fabrics as gowns, scarves and in traditional wear. You can get them at Kultura Filipino on all SM Mall branches.