6 Reasons Why You Should Visit Ecuador

Ecuador is a small country situated on South America’s West Coast, with part of it crossing the equator. While other South American countries get more attention from most travellers, Ecuador is a nation that goes under the radar.

Yet, home to the arguably the most extraordinary wildlife-filled islands on the planet, breathtaking peaks and captivating culture, Ecuador brings many surprises. Typically ignored by mass tourism for neighbouring countries like Peru, Ecuador still goes under the radar and that is what makes visiting this country even better. 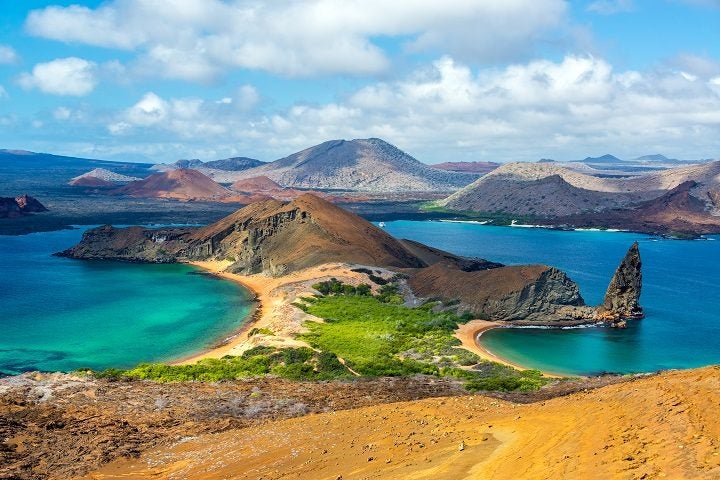 It’s probably right to say most people know about the Galapagos Islands than the country they are in. The prime attraction of Ecuador and possibly South America, these famed islands are where the theory of evolution began by Charles Darwin, influenced by the unique wildlife that still exists today.

From gigantic tortoises to black iguanas the Galapagos is home to some of the most pristine wildlife on the planet. If you’re a keen scuba diver or like to snorkel, then you have to here. The waters are teeming with marine life from seals, turtles, manta rays and plenty of sharks!

The fantastic thing about the Galapagos is that you’ll meet people there who have a purpose to do something. It isn’t a place you just pass through, as it’s a three-hour flight from the Ecuadorian mainland.

Quito, the capital, is a rustic city nearly 3000m above sea level making it the second highest capital in the world. It has evidently 16th century colonial styles within the city very much preserved from churches to buildings. It’s home to the equator line (Ciudad Mitad del Mundo) where you can literally step from one side to the other. With mountains, hills and deep valleys Quito is a picturesque city and is most travellers’ first point of call in Ecuador. 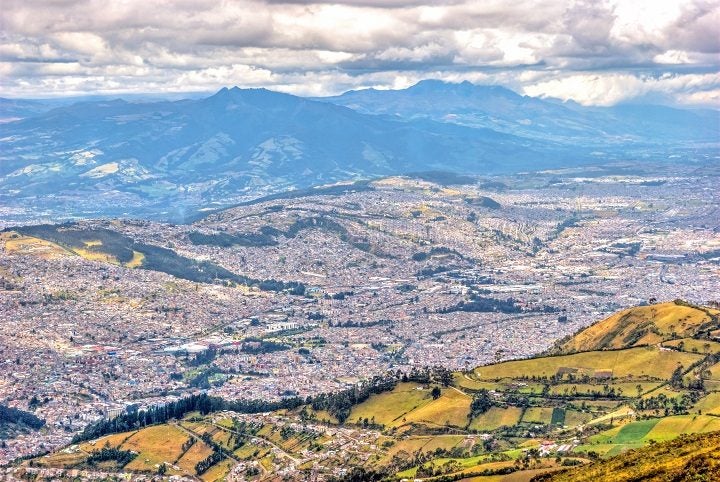 For something a little more adventurous, take a stab at climbing Mount Pichincha. If you get told it’s a short hike (going by experience) then forget that. Even after you reach as far as you can go via cable car, it’s still a decent slog up to the top, at an elevation just shy of 5,000m. 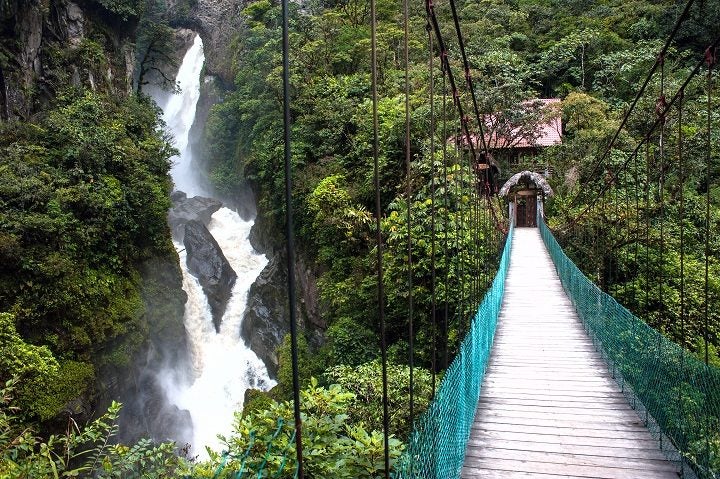 The adventure capital of Ecuador, Banos is a place made for thrill-seekers. From paragliding to white water rafting to bridge bungee jumps, Banos has many adrenaline-filled activities. The town itself is charming and surrounded by high rocks and waterfalls and is a traveller hotspot. Many travellers go to Banos after Quito and tend to stay longer than originally intended. 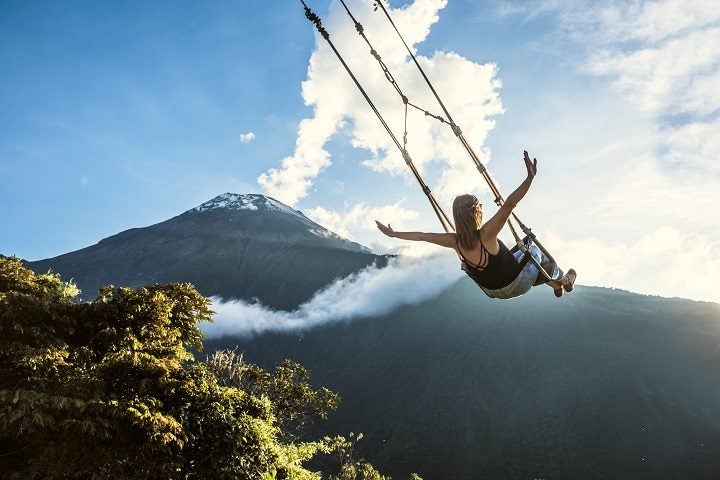 One of the major Ecuador bucket lists is to experience the ‘Swing At The End Of The World’. Casa del Arbol propels you over the ridge with death-defying depths below with Mount Tunguruhua, an active volcano in the distance. To try your luck on the swing, it only costs a mere $2 for a ride. 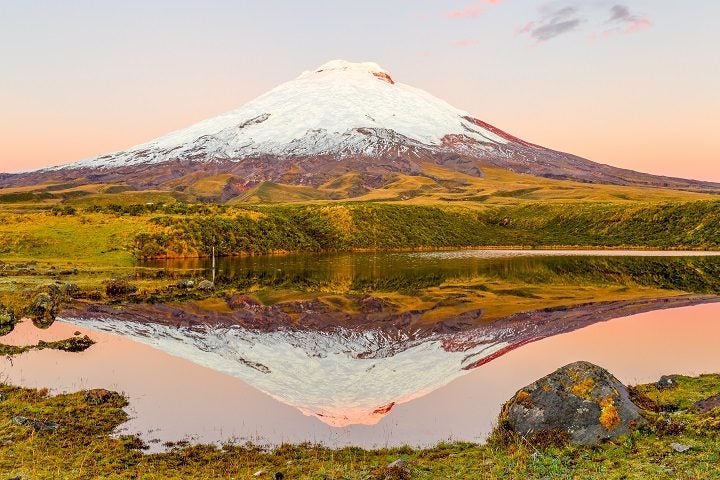 Ecuador’s second highest summit, just below 6000m high, is a top spot attraction for travellers. An active volcano with icy glaciers, Cotopaxi is lodged in the Andean Mountains. Its last erupted was as recently as 2015. As a matter of fact, historically, Cotopaxi has erupted every few years, so be prepared!

For travellers wanting to climb to the summit of this iconic volcano, it’s best to prepare in advance as the altitude levels can cause discomfort and issues. You’ll also need pre-glacier equipment and training too.

A great way of getting around Ecuador is by Wanderbus, the only hop-on hop-off service in the country. If you want a convenient way to travel Ecuador, Wanderbus takes you to the best spots including Cotopaxi, Banos and Cuenca. National Geographic also has recently recommended Wanderbus! 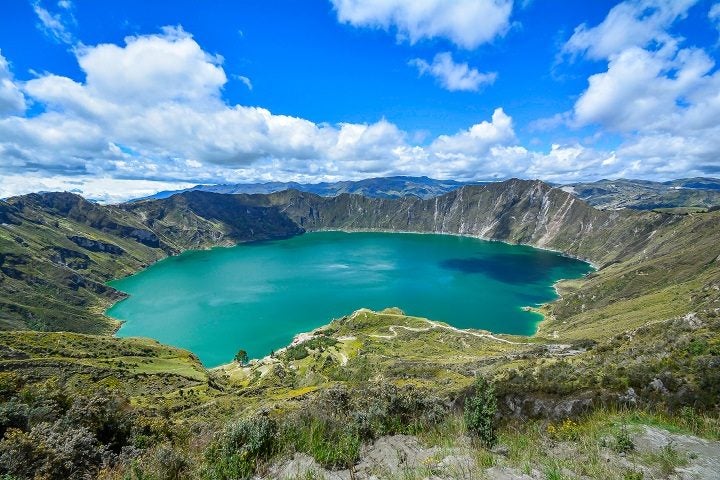 Volcanoes are noisy, violent and dramatic but visiting Lake Quilotoa, a former volcano now, is anything else. In fact, you’ll probably not find a more peaceful place in the country (if you get there early before the increasing number of tour groups). Quilotoa is beautifully scenic epitomised by its still emerald water in the crater. Still, you can hike the Quilotoa Loop for a standard three-day journey, passing through native villages and stunning untouched scenery. If you fancy a day trip this is also available. 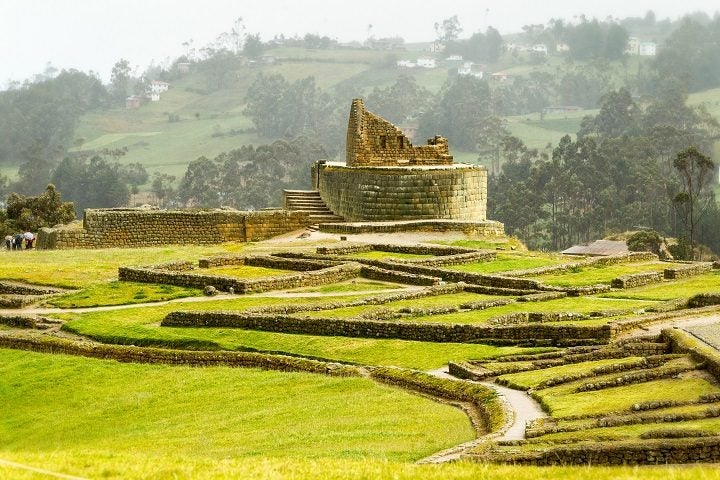 Do not mistake Cuenca for its namesake in Spain, the city in Ecuador is a travellers favourite. Although many people associate Cuenca with a relaxed place to be, it’s actually the third largest city in Ecuador. Travellers visit for the stunning El Cajas National Park that is home to cloud forest trails and lush scenic views. And there’s more; from Panama hats to rustic churches to museums, Cuenca is a cultural coup for travellers. Nowadays, it’s also becoming popular for expats and retires because of how safe and pleasant the city is. 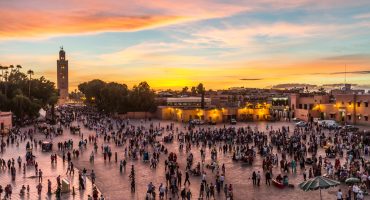 The 9 best cities to visit in Morocco

By Gisela with 5 min read