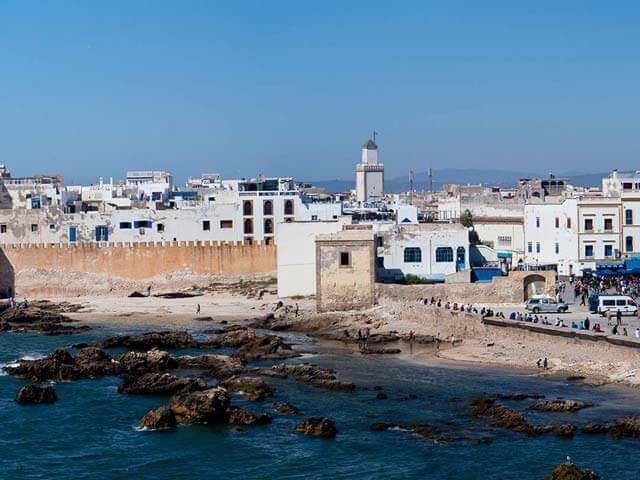 An overview of Agadir

Straddled between the shimmering Atlantic and the foothills of the Anti-Atlas Mountains, Agadir is an idyllic North African destination wedged on Morocco's southeastern coast.

The city was ravaged by an earthquake in 1960, which wiped out a third of its population. Since then, it has gradually rebuilt itself, emerging as one of Morocco's top travel destinations. While you can get a peek at local life around the gorgeous promenade and shining white marina, there's a lot more than meets the eye. Discover traditional Berber hospitality with a flight to Agadir.

What to know before visiting Agadir

The city is served by international Al Massira Airport (AGA), which offers flights to several European cities. Package holidays in Agadir are popular with overseas vacationers. British nationals won't need a visa to enter Morocco for a stay of up to three months. Flights from London or Manchester to Agadir are easy.

The official currency is the Moroccan dirham (MAD), though euros are widely accepted at the airport. Interestingly, there's no time difference between the United Kingdom and Morocco. Most of Agadir's locals speak Berber as their first language, followed by French and English. A flight to and hotel in Agadir make for an excellent holiday escape.

When is the best time to visit Agadir?

Agadir enjoys temperate and pleasant weather throughout the year, with very little chance of snow or rain. The hottest months – July, August and September – witness a large influx of vacationers, so a flight to and hotel in Agadir are best booked in advance during this time. Cooling sea breezes during summer play a part in keeping the weather enjoyable. The busiest months are often January, March and August. Footfall is slow during autumn, so package holidays to Agadir at this time are priced attractively.

Agadir boasts a thriving festive and cultural calendar. Extreme sports fans will enjoy the four-day long Enduro d'Agadir & X Rally, where participants must cover 1,400 km within an allotted time. May features the family-oriented Honey Festival, which honours traditional Moroccan sweets. It takes place in Argana, the world's biggest and oldest beehive collective and just a short drive from Agadir. The highlight of the year is summertime Timitar Festival, where Berber culture is celebrated with pomp and show for three days. The year closes with the Festival of Agadir – expect music, dance and revelry until the early hours.

What to do in Agadir

Places to visit in Agadir

A good starting point to your weekend in Agadir would be at the Amazigh Heritage Museum. The traditional life and culture of Morocco's original inhabitants, the Berber people, comes alive through 18th- and 19th-century handmade objects, old Berber musical instruments and jewellery, and carpets.

One of the city's most important historical sites, the raised plateau of Ancienne Talborjt lies just below the citadel. This was where many of the earthquake victims were buried. Alternatively, take a break from the coast at the Valley of the Birds, a pretty parkland that's home to playful Barbary sheep, exotic birds and waterfalls.

What to eat in Agadir

Most important conversations in Agadir take place over a cup of strong Moroccan coffee or a mint tea. Autumn visitors shouldn't miss the November Seafood Demonstration, where some of the best seafood preparations are on offer.

What can you bring home from Agadir?

Marché Central is an excellent spot for leatherwork and chessboards, while Al Mouggar Bookshop stocks an impressive collection of English and French literature. Local supermarkets are your best bet for Moroccan wines and canned fish. Let the good times roll during city breaks in Agadir!