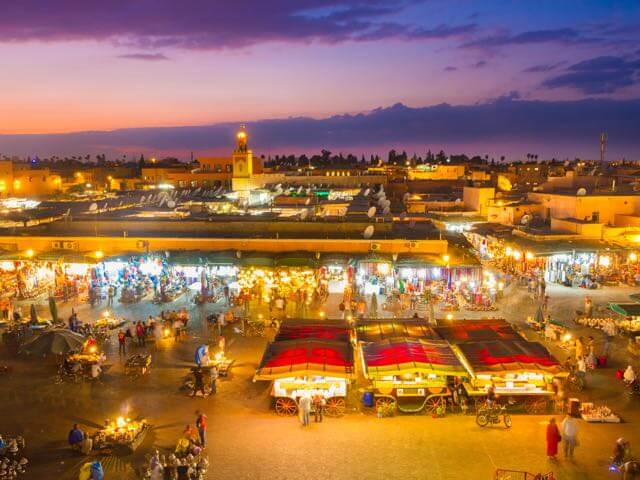 Marrakech, Morocco's fourth-largest city, is the destination of choice for those who want to immerse themselves in the culture of this fascinating North African nation. Located at the foot of the imposing Atlas Mountains, the city, which dates back to 1062, is split in two parts—the historic Medina and the more modern European-style district, Gueliz. Most of the historic attractions are located in the old town and once there, can be reached easily on foot.

A weekend in Marrakech let you explore its stunning riads and souks and take in the vista of the surrounding snow-capped mountains. Feast your way through the central square's market stalls and bask in the green spaces and parks in this city of contradiction and adventure.

What to know about Marrakech before you visit

The airport is located just 3km from the city, quite convenient for city breaks to Marrakech. Getting there is easy, as you can choose a flight from London to Marrakech or a flight from Manchester to Marrakech, depending where you live. At any rate, after your flight to Marrakech, you can take a taxi from directly outside the departures hall into the city, or opt for the local, air-conditioned bus which leaves the airport every 20 minutes.

Those with a British passport don't need a visa to visit, and can enter the Kingdom of Morocco for up to three months for the purposes of tourism.

The Moroccan dirham is the local currency. You can take cash out of the many ATMs around the city. However, keep in mind during city breaks in Marrakech that most of the cash points are located in the new town, so if you're heading into the Medina's souks for a day's shopping, be sure to take some cash with you. That said, many shops, even small vendors, will take international credit and debit cards. Morocco is in the same time zone as the United Kingdom, so there's no time difference to consider when planning a weekend in Marrakech.

The best time to visit Marrakech

Spring and autumn are the preferred seasons to put together one's package holidays to Marrakech. Between March and May, and then again between September and October, the temperatures are ideal for sightseeing, and often even warm enough to take a dip in the many courtyard pools. In winter, the climate in Marrakech remains pleasantly temperate, while June, July and August are hot, with daytime temperatures reaching highs of 35°C to 38°C.

If you're ready to beat the heat, July is an excellent time to visit for its celebratory atmosphere. The Marrakech Popular Arts Festival, held this month, features dancing, live music, snake charmers, and magic, while the end of the month sees the whole country celebrating Throne Day. At the end of November and beginning of December, the city plays host to the Sun Festival, a contemporary music festival.

What should you do in Marrakech?

Palmeraie, known as the green lung of the city, is a verdant outdoor space where you can take shade under the palms. The central square of Djemaa El-Fna is a highlight for many visitors. It particularly comes alive at night, with its numerous food stalls, tarot card readers, scores of musicians, and henna tattoo artists, among other diverse entertainments.

An excursion to the surrounding Atlas mountains is a fantastic full or half-day trip during city breaks in Marrakech. Explore the landscape and meet the local Berber population before returning to the city for dinner. You can also visit the nearby desert, where quad biking, camel riding, and even spending a night under the stars are all popular activities.

What are the best places to see in Marrakech?

Where to eat and drink in Marrakech

Tuck into a hearty tagine or sample one of the delicious local salads, which are prepared with fresh vegetables and grilled meats. Lamb and beef are the most commonly eaten meats and often served with couscous. Package holidays in Marrakech let you try a range of dishes. If you're staying in the Medina, try Le Salama Restaurant and Lounge, which serves Moroccan cuisine and cocktails on a riad rooftop. Café Clock, also in the old town, offers a modern spin on traditional dishes.

Djemaa El-Fna is fantastic for casual outdoor dining. In the evenings you can sample several small dishes from the different vendors. Though this is a Muslim country, alcohol is available (less so in the Medina) and can be purchased in many hotels and restaurants. Bars and clubs are not ubiquitous, but the city is home to Pacha, the largest nightclub in Africa, while Comptoir Darna is a standby for either dinner or a night out in a chic setting.

What should you bring back from Marrakech?

This has been a trading point for over 1000 years—as such, there is plenty to buy, so shoppers, book that flight and hotel for Marrakech! Produced in nearby Essaouira, Argan oil is coveted both as a beauty product and a healthful oil. In the souks, jewelry, lamps, and rugs can be purchased at a reasonable price with a little negotiation. Embossed leather slippers come in a rainbow of colours, while beautiful woven baskets can be picked up in any size.