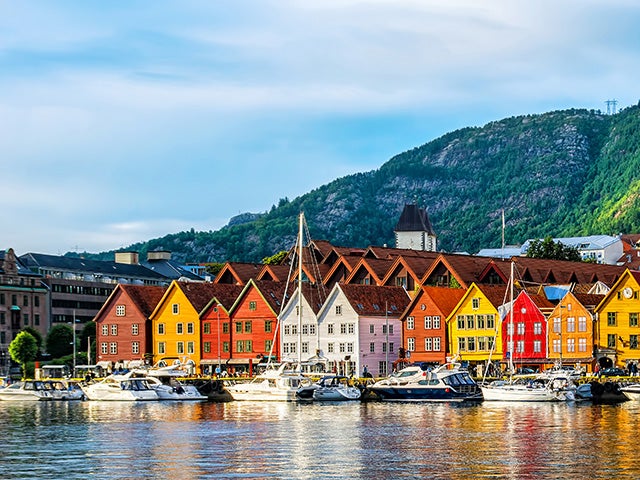 Situated on Norway's western coast, in the heart of the country's famous fjords, Bergen offers visitors the chance to experience Norwegian history and culture while surrounded by some of the most spectacular scenery in the world. Known as the Gateway to the Fjords, Bergen is ideally located for those who want to explore the Norwegian coast, either by road or by sea. Bergen, which sits on the Byfjorden, or 'city fjord', was founded in the 11th century. It was Norway's capital during the 1200s, flourishing as a trading post in the centuries that followed.

What to know before visiting Bergen

If you're thinking about booking a flight to and hotel in Bergen, note that flights from the UK to Bergen depart from Manchester and London's Heathrow and Gatwick airports. Bergen Airport (BGO) is located about 12 miles south of the city. Travellers can take either the Bergen Light Rail system or a connecting bus to the centre of Bergen upon arrival.

While the main language in Bergen is Norwegian, most locals speak English, especially those working in hotels, restaurants and at visitor attractions. The currency is the Norwegian krone and Bergen is one hour ahead of the UK.

When is the best time to visit Bergen?

As you might expect, package holidays in Bergen in the winter months can be quite chilly. However, there are plenty of places in the city where you can stay out of the cold! Summers in this part of Norway are surprisingly mild, with average temperatures around 20°C, though some days can get quite hot and sunny.

What to do in Bergen

A boat trip along the Norwegian coast and into the majestic fjords is a must while staying in Bergen. Plenty of local companies offer one-day cruises into the Sognefjord, Hardangerfjord and peaceful and picturesque Osterfjord. Hikers can head to the Nigardsbreen glacier in the mountains above Bergen, where the winter snow also offers the opportunity for cross-country skiing and sledging – great ways to blow off some steam on a weekend in Bergen.

Summer or winter, the Flåm Railway, combined with a Sognefjord boat trip, makes for an ideal day out while on city breaks in Bergen. Named as one of the most beautiful train journeys in the world, the railway connects the village of Flåm, on the edge of the Aurlandsfjord, with the mountain village of Myrdal. Running throughout the year regardless of the weather, the 12-mile railway line has an impressive 1-in-18 gradient and offers travellers spectacular views of fjords and mountains.

Places to visit in Bergen

With a quaint Old Town, fascinating museums and attractions, there's plenty to keep visitors of all ages amused on package holidays in Bergen.

What to eat while in Bergen

Fish and seafood play an important part in Bergen cuisine. Salmon is the main ingredient in two of the most popular Norwegian dishes – røkt laks (smoked salmon) and gravlaks (dry cured salmon with dill, salt and sugar). If you prefer meat, try kjøttboller (beef meatballs fried with ginger and nutmeg), often served with a warming portion of mashed potato.

Krumkake are a great sweet snack to enjoy on weekends in Bergen. Consisting of thin pancakes filled with cream, they are served in many cafés and bakeries throughout the city. Evening meals in Bergen often end with a glass of akevitt, a strong spirit made with potatoes and flavoured with herbs and spices.

What can you bring back from Bergen?

A bottle of akevitt makes a great gift for friends and family back home. Alternatively, treat yourself to a traditional Norwegian knitted sweater – they often feature colourful geometric designs. You could also bring back a little bit of Norwegian culture by buying a lucky troll doll or a traditional Viking drinking horn.