When it comes to tourism in the UK, there is one main winner year in, year out. London. The capital brings in more visitors by a country mile than any other city in the UK so it’s only right we look to explore some other buzzing British cities on offer. Long living in the shadows of Northern counterpart cities like Manchester and Liverpool, there’s a ‘new’ city making the travel headlines. 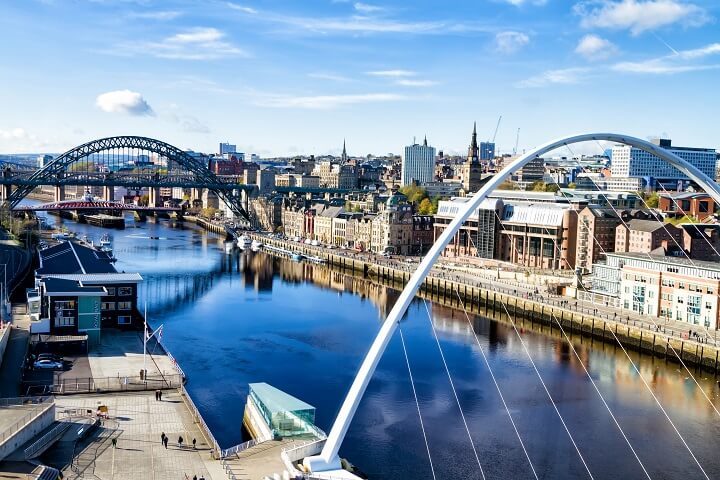 Epitomised by its friendlier locals known as ‘Geordies’, one city in particular, is finally being noticed for its invigorating attractions and innovative efforts. The capital of the Northeast, Newcastle-upon-Tyne is that city.

Known for its pumping social life, Newcastle has often been overlooked as anything significantly cultural, until now. 2018 promises to be a significant year and some would say it’s Newcastle’s tyne to shine.

The 2-month-long exhibition that promises to be England’s biggest of the year has essentially put Newcastle on the cultural map. Commencing from the end of June until early September it will be a collection of live performances, fascinating exhibitions, dramatic sculptures and art trails. You can see Robert Stevenson’s famous locomotive rocket on display at the Discovery Museum, whilst every hour there will be the UK’s largest water sculpture taking place on the Tyne. Not to mention, the Sage will be rocking with a flurry of shows and events including Lauren Lavernes Great Northern Soundtrack, with a week’s worth of celebrating gigs and shows, all to do with music from the North! And some of best music in the world comes from the North of England!

For more information visit the website of the Great North. 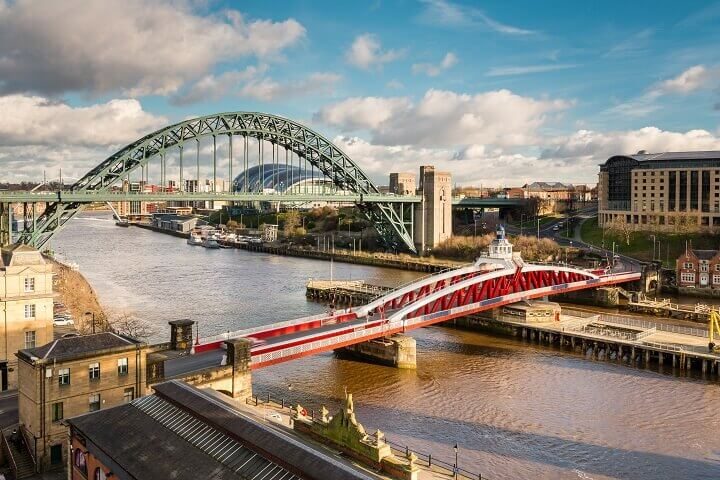 You’ll soon know you’re in Newcastle upon Tyne because of its stunning iconic bridges, non-more historic than the Tyne Bridge. Magnificent in its design and appearance, Doorman Long, a company from neighbouring town Middlesbrough, were the engineers of this Geordie gem. They also built Sydney Harbour Bridge, too. Epitomized by its towering arch linking Newcastle and Gateshead, it’s arguably the cities landmark attraction. 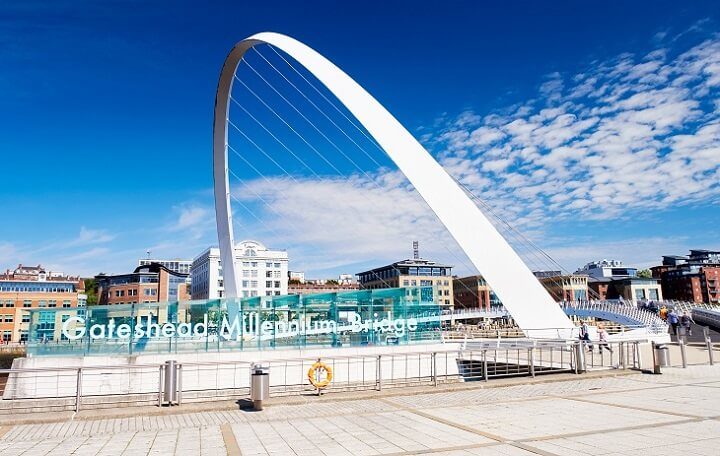 Gateshead’s Millennium Bridge is the new B on the block, having only been built in the 90’s but represents the modern era of bridge architecture. Shaped liked a blinking eye, energy enthusiasts will be ecstatic because it costs less than £4.00 to tilt open and close to allow the passing boats beneath.

Angel of the North 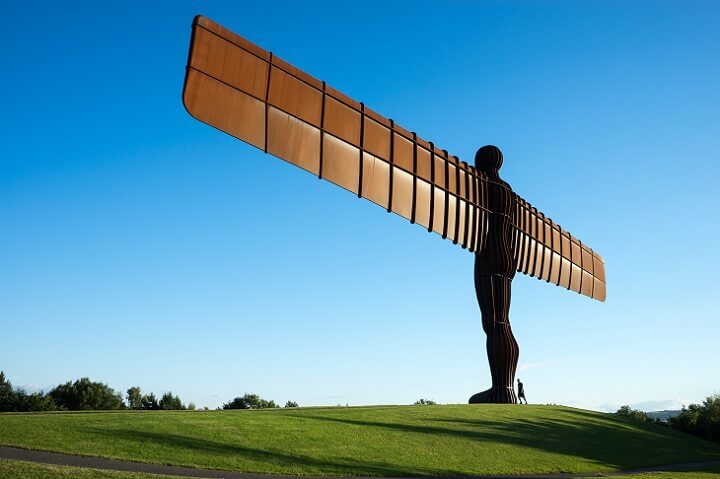 Also built back in the 90’s, the Angel of the North may sound like a piece of renaissance art but it’s more a contemporary work of art that reinforces Newcastle’s cultural calling. Thought to be the largest angel sculpture in the world at 20m high, the Angel of the North represents the Northeast, not only Newcastle. Whether you visit for selfie purposes or just a sheer jaw-dropping moment, no one leaves a visit to the Northeast without calling here. 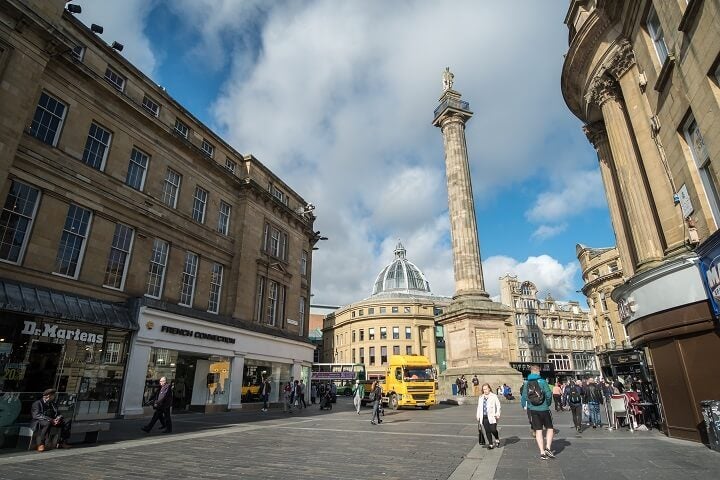 Back in the early noughties, it was once dubbed as the UK’s ‘most beautiful street’ and yet Grey Street still gets that reputation today over 15 years on – at least from the locals. Still, when you visit this street for a second you might think you’re in an open-aired marble coloured library, a credit to how pretty the rows of buildings appear. The style of Grey Street would be spotted in somewhere like Edinburgh and adds a bit of extra class and finesse to the city.

Tripadvisor’s top attraction; Victoria Tunnel is one of Newcastle’s most immersive experiences. Open to the public by tour, this is almost like the British version of the Qui Chi Tunnels, famous in Vietnam. Built as a coal waggonway in the 19th century and then later used as an air-raid shelter for World War Two, the tunnel runs for over two miles from the city’s North to Ouseburn. Its remnants are also still visible here with built-in toilets and religious carvings classic examples. Get the full lowdown on the stories of the people who once temporarily resided here by the energetic tour guides and get a real feel for what life was like underground. This isn’t for anyone who has a fear of tight spaces, it can get a little spooky down there! 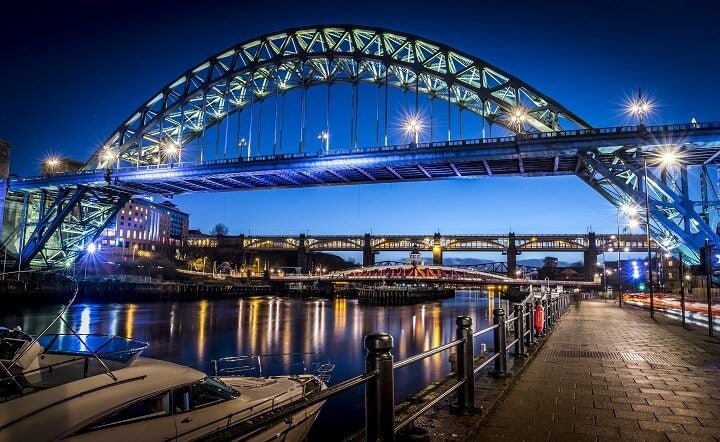 Let’s revisit the stereotype that Newcastle has nationally around the UK, its non-stop and vibrating nightlife. You can even say this is part of the typical Newcastle culture, going out. With colder temperatures expected most the year up in the Northeast, that doesn’t prevent the Geordies from wearing whatever they want – or however less they want. With the bar and nightclub scene nothing short of pulsating here on the weekends, you’ll find everything from local craft beer to jaegerbomb drinks cheaper than soft drinks! The most famous ale affiliated with the city is non other than Newcastle Brown Ale and you have to try it!

From the dazzling Quayside to the Gate in the centre and from Osborne Road to the Diamond Strip, there are plenty areas to go out in Newcastle. The good old saying of ‘I’m only having one’ doesn’t carry much weight in these Geordie shores! If you’ve had a few too many and fancy some comfort food, try chips cheese and gravy or a kebab with tons of garlic sauce!

The contrary to guzzling cheap drinks in Newcastle is exploring its cultural attractions. Tyneside Cinema opened in 1937 and still runs today, in vintage and digital fashion too. Showreels are intriguingly part of the programme here, taking viewers back in time to what a cinematic experience was like some 80 years ago. And yet, the Tyneside shows film classics throughout the years in addition to that. For a traditional good old movie night, there’s nothing cosier than parking up with some popcorn here.

Want to go there? Find your best flight.

The Sage Is Set 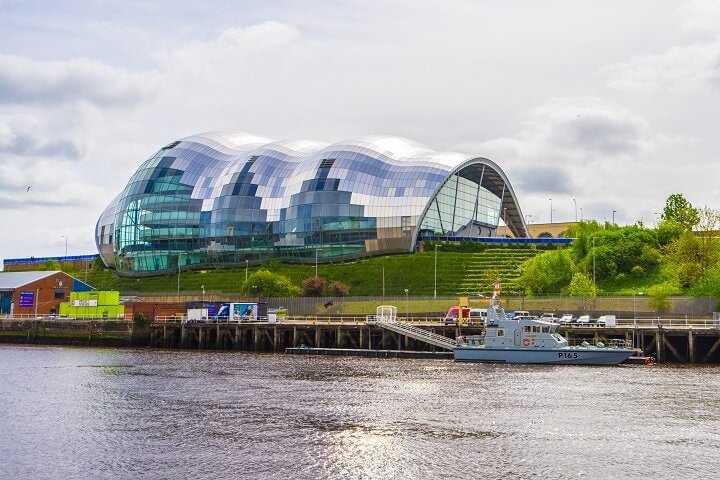 The Sage is the main venue for live music and shows in the area and has main-stage status during the Great North Exhibition. Having housed acts like Morrissey, Mogwai and Mumford and Sons, the Sage is no stranger to international events. With a turquoise turtleback shaped-roof that shines beautifully with the reflection of any natural light, it’s a venue you won’t be able to take your eyes off. For any of the regions best and live events, make sure you check the schedule to what’s on here.

The BALTIC Contemporary Museum of Art 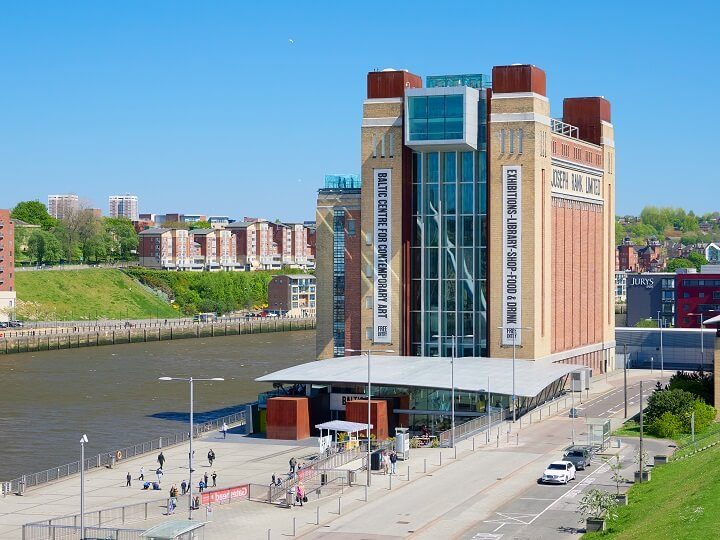 The BALTIC, another part of the Gateshead Quayside development along with the Millennium Bridge and Sage, houses contemporary art exhibitions in a building that once used to be an old flour mill. For art lovers of all sorts, witness arts of a varied nature from controversial posters to sporadic designs. With several floors of the arts to get lost in, housed by a local old building, the BALTIC is one of Newcastle’s top attractions.

For an insight into the original ‘New Castle’ visit ‘The Castle’ for a historic throwback to where the city’s origins derive from. For bargain buys and hot pies check out Grainger Street Market and Quayside Sunday Market. If you have more time in the area, make sure you spend a day at Beamish Museum, a historic open-aired museum exhibiting the life from the 19th century.

NewcastleGateshead has tons of information of what to do in the area. For further info, check out the website.

Who is curious to go to Newcastle with us? Look for your best flight now

✈ My flight to Newcastle ✈ 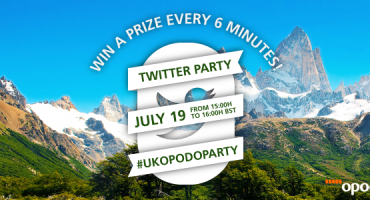 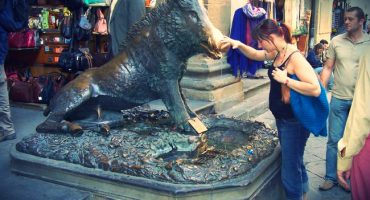